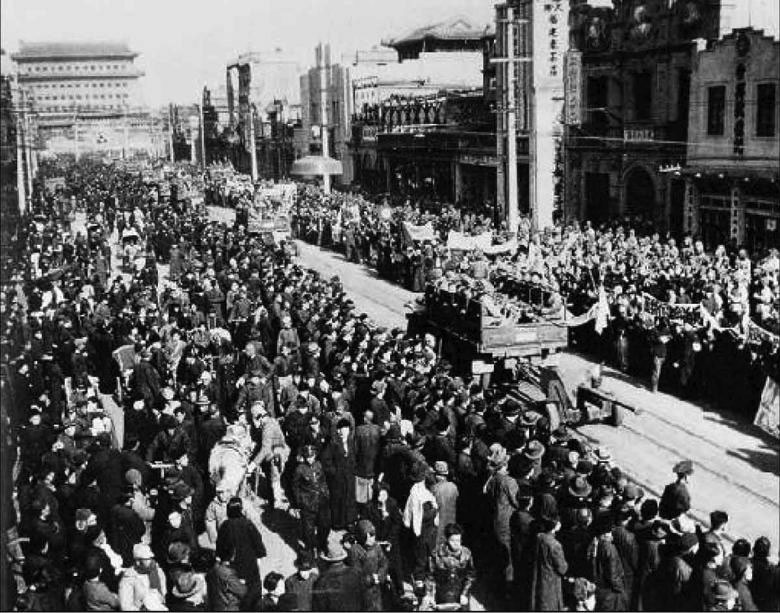 On 1 October 1949 the leader of the Stalinist Chinese Communist Party (CCP), Mao Zedong, declared the formation of the People’s Republic of China. 70 years on, the regime and China’s dictatorial president Xi Jinping, standing on the same spot in Tiananmen Square, saluted a massive parade of military power. In a series of three articles the Socialist explains how the 1949 revolution came about, what developments subsequently occurred under Mao’s regime (1949-76), and what the situation is today in China. In the first article, Lenny Shail examines how the failed workers’ revolution of 1925-27 shaped the CCP and the 1949 revolution. 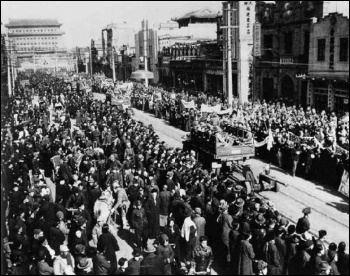 500 million Chinese workers and peasants, kept at the level of pack animals by landlordism and capitalism, their country dismembered into imperialist ‘spheres of influence’, shook off these chains and stepped onto the scene of world history.

The CCP did not come to power on the back of a working-class movement. With its Stalinist outlook and methods it initially stood for a limited agenda to establish a ‘new democracy’, while keeping a capitalist economy. But almost despite itself, the CCP was thrown forward by one of the mightiest revolutionary waves in world history.

Mao Zedong was the leader of the Red Army and CCP that presided over the ‘third’ revolution of 1944-49. He was in his own words, a “Stalinist”,

and built a regime that mirrored the existing bureaucratically controlled Stalinist Soviet Union at the time – not a democratic workers’ state along the lines of Russia in 1917 (before Stalin’s bureaucratic terror campaigns against workers’ democracy).

Another radicalising factor was the widespread disappointment with the outcome of the 1911 revolution. All major issues – land reform, imperialism, the unification of China (historically the ‘democratic’ tasks of capitalist revolutions) – remained unresolved. But the increasing development of a working class in the cities saw the arrival of a new leading force in the struggle.

However, the period after the Russian revolution saw defeats of working-class socialist revolutions internationally, particularly in Germany. The economic underdevelopment of Russia – reinforced by the ravages of World War One and imperialist military interventions after the revolution – left the revolution isolated and the small revolutionary working class exhausted.

This was in sharp contrast to Trotsky, who co-led the 1917 revolution with Lenin. Trotsky organised the Left Opposition of the Russian Communist Party, and defended Marxism and workers’ democracy in the debates and struggles over developments in the Soviet Union and internationally.

The Chinese revolution of 1925-27, saw the sharp political differences between Stalin’s clique and Trotsky’s left opposition tested in a gigantic struggle by the Chinese masses. The position in China, in many ways a more favourable position than existed even in Russia in October 1917, meant a successful revolution was entirely possible.

The revolution of 1925-27, led by the working class, gathered in the urban centres of Shanghai, Guangdong, Wuhan, and elsewhere and pounded at Chinese and imperialist landlordism and capitalism in the workers and poor people’s quest for a new society.

In the 1917 Russian revolution – Trotsky’s theory of the ‘permanent revolution’ was brilliantly confirmed by a revolutionary working class, which consolidated the ‘democratic tasks’ of the February revolution by carrying through the socialist revolution in October. In contrast, in China Stalin’s regime stood for an alliance of the working class and the exploited peasantry with the so-called ‘national capitalists’ in a ‘bloc of four classes’.

It argued that the leading role in the revolution belonged to the pro-nationalist party, the Kuomintang (KMT), representing China’s ‘progressive’ capitalists. Stalin’s aims – expressed in the ‘theory’ of ‘socialism in one country’ – was to justify the bureaucracy, consolidating its position in Russia rather than spread the revolution to other countries.

On Stalin’s instructions the CCP merged its forces into the KMT. The leader of the KMT, Chiang Kai-shek, was even invited to Comintern meetings, and in 1926 Mao Zedong from the CCP was elected as an alternate member of the KMT’s executive committee. Despite these mistaken tactics, as the working class moved into struggle, the CCP grew quickly (from 300 members in 1923 to 58,000 in 1927).

Trotsky, with the experience of the Russian revolution, argued that China’s weak capitalists couldn’t carry out any of the needed reforms – the democratic tasks of the revolution – and indeed were rightly fearful of the revolutionary working class.

Trotsky’s advice to the CCP was to fight for an independent workers’ leadership of the struggle. Instead the party became totally subservient to the KMT.

In March 1926, KMT forces massacred striking workers in Canton and established a military dictatorship. But the news of this atrocity was suppressed within the Comintern – the KMT had earlier that month become a ‘sympathising section’ of the Comintern!

The Comintern didn’t recognise defeat in China until 1928 and only then pointing the blame at the CCP leaders, mainly Chen Duxiu – who had opposed the merger with the KMT and later became a co-thinker and supporter of Trotsky and the Left Opposition

The remaining CCP leaders from then on turned their backs on the cities and the working class. Their entire emphasis was now on the peasantry and the countryside. Only in words was any alliance of workers and peasants factored. The building of a peasant army – the Red Army – became the priority over class struggle against capitalism. By 1930, only 1.6% of the party membership were workers compared to 58% in 1927.

The CCP, however, still maintained the key trends of Stalinism: nationalism, a ‘two-stages’ theory of revolution, ‘popular fronts’ ie alliances with capitalist parties, and a regime of bureaucratic centralism inside the party.

Until the CCP won power at the conclusion of the civil war with the KMT in 1949, the peasantry remained the key focus and majority of the party. This period saw the increasing bureaucratisation of the party, the replacement of internal debate and democracy by a regime of commands and purges, and the cult of personality around Mao – all mirrored from Stalin’s methods of rule.

The Russian revolution degenerated in isolation after the failure of revolutions internationally. The Chinese revolution of 1949 was bureaucratically deformed from the outset. It never was a democratic workers’ state.

Nonetheless, the driving out of capitalism and imperialism and the introduction of a planned economy, despite the repression and bureaucracy, allowed huge social and economic gains for the Chinese masses – giving a glimpse of what would have been possible under genuine democratic workers’ control.