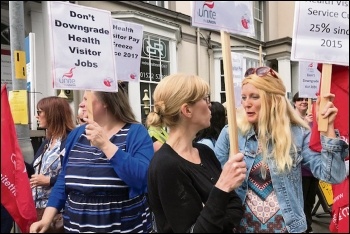 Lincolnshire health visitors are being balloted for further strike action with the county council trying to 'divide and rule' over future job roles.

This is a tawdry 'divide and rule' manoeuvre from a council with a surplus of £188million for 2018-19 - that found the money to pay off their former chief executive with £292,000 for a mere six month's work!