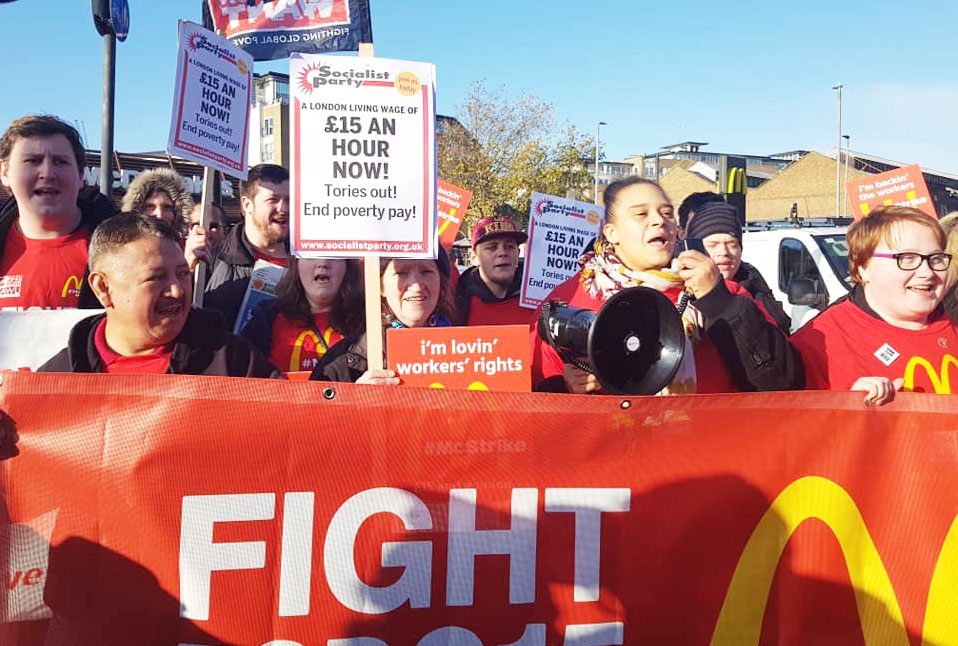 On 12 November, McDonald’s workers at six restaurants in south London took strike action, and protests took place in towns and cities around the country, as part of the fast food workers’ global day of action.

The main demand of the strikers was for a living wage of £15 an hour to end poverty pay. But they are also fighting for shifts to be notified four weeks in advance, a choice of guaranteed hours up to 40 hours a week and recognition of the Bakers Food and Allied Workers Union.

Strikers from the six south London McDonald’s restaurants protested in Wandsworth in the morning then at Downing Street in freezing rain at lunchtime. Rob Williams spoke to give solidarity from the National Shop Stewards Network.

Striker Melissa declared: “We’ve had enough! Of choosing between paying the gas or buying food. Of not being able to buy new shoes for work.”

Lewis Baker said: “We don’t have set hours, so we don’t always earn enough to pay the bills. If we got £15 an hour it would have a massive impact – I would be able to afford to pay my rent, to pay bills, go on holiday and have some kind of a work-life balance. It’s important to strike against massive corporations like McDonald’s who are making millions.”

The Bakers Union said that these brave workers were standing up for low paid and zero-hour contract workers across the country. Labour shadow chancellor John McDonnell spoke and pledged support for the strikers £15 claim.