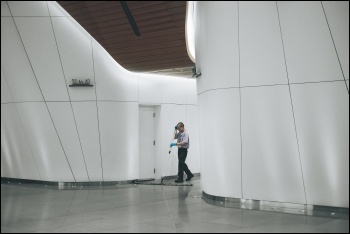 The Mayor of London and Tory government have conspired to cut £1 billion from Transport for London's budget but tube workers are fighting back.

Cleaners working for ABM are balloting for strike action to win basic rights to sick pay, staff travel facilities and a decent pension.

Socialist Party member Jared Wood, who is standing for election to the RMT union executive from the London transport region, said: "We must all help to deliver a resounding yes vote for strike.

"If we can win our cleaners' dispute the working life of our cleaner members would be transformed, and so would the industrial position of RMT."

All grades, whether London Underground staff or members working for sub-contractors are under attack as employers seek to cut costs and pass on the austerity policies of both the government and the London mayor.

London Underground staff are preparing to ballot for action in a fight for improved conditions. This includes a demand for a 4-day week to address shift patterns that have been shown to reduce life expectancy through fatigue.