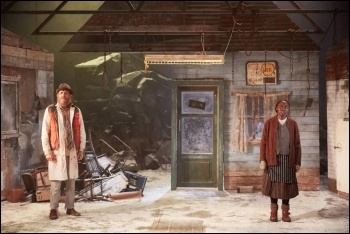 The shelves, shop and nearby village are equally empty. All they have left are memories. The shop and village have been left behind and it takes on a post-apocalyptic feeling. A feeling confirmed when it's revealed that the village and the "city by the sea" have been ravaged by war and unrest. Jet fighters roar overhead and the characters shout abuse and wave knives at the unseen combatants.

Even all-important memories are under threat. John Daniel fights the turning of his trousers into dusters because of their link to his memories - it's hilarious and tragic.

But more fundamentally, many of Daniel's memories are in, and linked to, the "old language", different from the one everyone now speaks. This clearly resonates profoundly in the play's Welsh setting but is also a warning about loss in a world torn apart by capitalist crisis. Writer Ed Thomas draws no conclusions, but the major theme is loss. Compounded further by the story that the Captain (Jason Hughes) tells when he shows up at the shop. Especially the loss of community, people, society and its memories and relationships.

The loss is cleverly illustrated as the spartan, but evocative set disappears throughout to leave only Bear Ridge mountain. The use of music and lighting is brilliant too. It all complements the powerful monologues and lovely humour of Ifans and co. The play will have you on the edge of your seat as you watch these characters on the edge.