Link to this page: https://www.socialistparty.org.uk/articles/29878

The ruling by the High Court against the Communication Workers Union (CWU) that voids their national strike ballot in Royal Mail is a massive attack on the union, its postal worker members, and the whole labour and trade union movement, which must now come to the CWU's aid.

This is a defining moment for workers, their unions and their ability to organise and strike.

It will not be lost on the 110,000 CWU posties, and many other trade unionists, that a strike vote of 97% on a 76% turnout, smashing the draconian and undemocratic voting thresholds in the Tory anti-union laws, has been ruled out by one single unelected judge acting for the bosses.

Moreover, as the CWU leadership has rightly claimed, one motivation is to stop a strike during the general election, called by Tory PM Boris Johnson because he can't govern as he doesn't have a majority!

Perhaps this is the most extreme example yet of the anti-worker character of the law. It’s used to protect the Tory government and bullying Royal Mail management, who wanted to prevent action during their most profitable time of the year in the run-up to Christmas.

The CWU now has to discuss its response to the court ruling. We have had regular national reps meetings, and an emergency one should be called in the next few days, with local gate meetings organised to report back.

This is the best way to prevent a vacuum opening up, and keep members together. The leadership's immediate response was to raise the possibility of a legal appeal and even a re-ballot. But the idea of militant action should be tested out with reps and members.

The postal workers have a proud history of taking unofficial action when necessary to defend victimised reps and members. This has been common over the last few years, and even during the current balloting process.

But the union should consider how best to ensure that action taken against this outrageous decision isn't isolated and sporadic. The best defence against any management offensive is to act together - with properly prepared national action.

In the meantime, goodwill should be withdrawn in offices, including not volunteering for overtime. This would send a real message to Royal Mail that the union and postal workers aren't going anywhere.

But posties have another tradition - supporting other workers taking action, often refusing to deliver mail across picket lines. The whole union movement must immediately give support to the CWU.

The Tories, through David Cameron, supported by the likes of Boris Johnson, devised the Trade Union Act as the latest in the long line of their anti-union laws going back to Thatcher's. 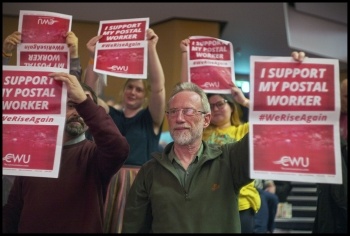 After the two-million-strong 2011 'N30' public sector pensions strike, they wanted to make national strike action impossible by bringing in the undemocratic voting threshold of a 50% turnout to make a strike legal.

The CWU smashed this by an incredible campaign of mobilising members. But the judge ruled against them because, rightly, the union acted against the Thatcherite spirit of the anti-union laws, which seek to isolate and atomise union members, so that they vote alone, with all the propaganda from management bearing down on them.

Therefore, the response has to be defiant and collective across the movement. In their bulletin to members, the CWU leadership correctly states: "This injunction is not only a massive injustice to our members, it's also an injustice to every worker in the country.

"We all need to wake up and recognise that this Tory government has deliberately stacked the rules against workers, in favour of the constituency they were born to serve - which is big business and the establishment.

"We appeal to the TUC and workers everywhere - in what is a call to arms - that it's time for us to fundamentally shift the balance of forces in this country back to working people and remove these draconian laws once and for all."

There should be an immediate joint meeting of the TUC General Council and the Labour leadership of Jeremy Corbyn and John McDonnell.

There should be unequivocal support for whatever action the CWU and its members decide to take. They should call an emergency national demonstration on these demands:

This could link up with the increasing number of workers taking action - including what is effectively a national strike of university lecturers and staff who are taking eight days of action from Monday 25 November to Wednesday 4 December, as well as RMT union members who are on strike during November and December on South Western railway and West Midlands Trains.

Jeremy Corbyn should publicly support the CWU - re-committing to his policies of repealing the Trade Union Act and re-nationalising Royal Mail.

This would give confidence to postal workers, and contrast him with pro-Royal Mail management Boris Johnson and expose his fake pro-worker populism.

The time to act is now - support the CWU and the postal workers. Defeat Royal Mail management. Get the Tories out - for a Jeremy Corbyn-led Labour government on socialist policies, including the re-nationalisation of Royal Mail.

This version of this article was first posted on the Socialist Party website on 13 November 2019 and may vary slightly from the version subsequently printed in The Socialist.