Link to this page: https://www.socialistparty.org.uk/articles/30026 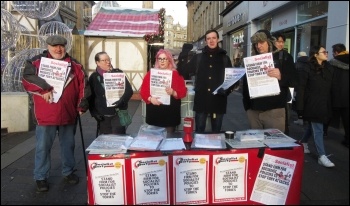 After the general election: Socialist Party members on the streets

Socialist Party members across the country were out doing street stalls on the Saturday after the general election, with a special post-election supplement of the Socialist. Our message: Stand firm for socialist policies against Tory attacks! Below are some brief reports and comments from some of the stalls and demonstrations that were posted on Facebook or emailed to the Socialist Party.

On Saturday we had two Socialist Party stalls on Tyneside (Gateshead then Newcastle). They were both phenomenal! We were all a little apprehensive about what the mood would be like. But we were bold and audacious and people responded enthusiastically to our call to stand firm against the Tories.

We were helped by our Socialist Party post-election supplement - which lays out clearly what needs to be done next. We had one posted on the front of our stall and people were stopping to take a look at it. 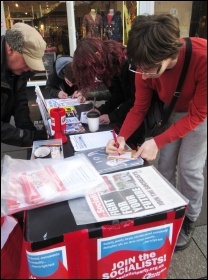 In Newcastle people were queueing up to join or find out more about us (see pic on the right of young people signing the join-up cards). We've also had a request for more information from someone in Sunderland who is following us on Facebook.

I've never had my hand shaken so many times on a stall! We were thanked for arguing that Boris can be beaten. A woman in Gateshead - who charged up to us to say she'd torn up her Labour Party card because she supported leaving the EU - thanked us for being out on the street fighting back.

We reminded people that in 1987 Thatcher had a majority and she thought she was invincible. But then she attempted to impose the rotten poll tax - and the so-called Iron Lady was reduced to iron filings as a result of the mighty anti-poll tax campaign. Boris also thinks he is invincible. He will come a cropper against the working class. Now is the time to join the socialists! Join the fightback.

In Birmingham there was volatile anger ... going both ways, pro/anti-Corbyn or Boris and their stances on Brexit. But also lots of support for us and wanting to join up.

In some ways it was like a psychological warzone, but more optimism than pessimism and the main message and sentiment was ordinary workers are not happy to wait for another five years for another election and are prepared to get organised here and now to join a fightback against Tory austerity. Places like Erdington, Northfield, Castle Vale, etc, can't be abandoned by the Labour movement.

We were back out campaigning today! Stand firm for socialist policies to stop Tory attacks!

Sheffield stayed Labour, even increased some majorities, and held Hallam which was very marginal. Passing our stall were some triumphal Tories and a few saying "I've always voted Labour but.......", and a few saying "You're a bit late" (to get Tories out). But those that came up to the stall were gutted, fearful but defiant. Twelve bought a copy of the Socialist and a young woman filled in a card to join the Socialist Party. The fightback starts now.

we're out campaigning in York to stand firm for socialist policies! We had support from NHS staff including an ambulance crew taking time out to buy our paper and our post-election bulletin.

A very positive stall in Halifax. There were a few negative comments, but lots of people were worried about the NHS and up for a fight. Four cards to join or receive more info were filled in and around ten copies of the post-election supplement of the Socialist sold.

Tory Austerity Britain out here today. Cash Converters have some poor person dressed as a teddy bear giving sweets out in the market. But we're here too - to talk to people about standing firm for socialist policies to fight Tory attacks. Join us - if not today, in the new year. We're here to fight back.

Whatever blows the bosses and their politicians land, the Marxists are always straight back out, contradicting the capitalist media lies and building the working-class resistance. Many people who stopped to chat with East London Socialist Party saw immediately that Corbyn's left policies are hugely popular, and blamed Labour's mistaken position against Brexit. The Tories are in for one hell of a ride. The fightback starts here.

In east London, we went to Stratford. We met people who agreed the Blairites have to go and should have been deselected long ago. We met people who agreed that socialist policies didn't lose Corbyn the election. Some people did mistakenly blame Corbyn's left-wing policies for the defeat. There's definitely a fight on to make sure we stand firm in support of socialist policies.

Newham's schools are being privatised through academies. And the nearby King George A&E is threatened with closure. Anti-working-class policies that Boris supports. Will we accept our schools sold off and NHS closed? No! We're going to strike, fight, protest and win. And the fightback started today. Our NHS poster was ripped apart by the rain and wind - an allegory for what'll happen if we don't.

28 copies of our paper were sold, two people said they would like to join us and there was a real spirit of resistance from everyone I spoke to, from a 15 year old lad to a woman of 83. They were disappointed yes, but determined.

Nottingham and Mansfield Trades Council held a protest today, with about 75 people attending. We were there, continuing to fight for socialist policies and against the Tories. Our election special was well received. We gave out lots of leaflets for our Nottingham Socialist Party open meeting on Monday. 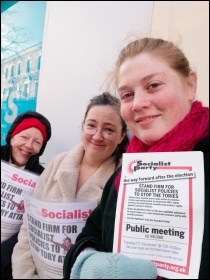 One guy donated £20 despite not being convinced, but he was glad to see someone fighting. The number of people around us and interested in getting involved has increased, including a student who stopped at our stall.

We were on the streets in Brighton, Portsmouth, Southampton and Reading to rally those ready to fight this Tory government with socialist policies to stop cuts, privatisation and racism. Lots of support and interest, many of our election specials sold, plus donations collected and new members joining. This week there will be meetings in Southampton, Reading and Brighton to discuss the election result and make plans for the new year.

We had a really enjoyable Socialist Party post-election campaign stall in Reading, apart from the gale force winds. Even gloating Tories admired us for being out so soon. We got new recruits, sold papers and received larger-than-normal donations. The fightback has started! Stop the Tories!

Socialist Party members joined the Portsmouth TUC rally in support of the striking RMT guards on SWR #keeptheguardonthetrain . It's high in Johnson's sights to ban strikes in the railways; these fighters are in the frontline. Any attack on trade union rights must be met with the full force of the trade unions' six million members. Far more powerful than the handful of Tory MPs and their billionaire friends.

The fight goes on in Southampton for the millions not the millionaires, to resist the Tories and oppose cuts, whoever makes them. Solidarity with everyone fighting back and thanks to everyone supporting our socialist policies. A devastated nurse told us: "We have to fight!" We sold papers, collected donations and received contact details from people interested in joining. Join us today!

Our post-election Saturday stalls went well in Stroud and Bristol. I received a text last night from a young worker member in Barnstaple telling me he'd signed up six friends yesterday. Two 'join' applications have come in from Plymouth from workers who have decided it's time to come on board. Also a paramedic from Weymouth called me to say he wanted a membership card without delay. He's got his wish.

There are lots of tasks to be undertaken in rebuilding the confidence of the left, but these signs all point to a realisation that the struggle must be waged differently next time, with the fuel of Marxist ideas and solid organisational methods as indispensable foundations for success, politically and industrially.

Our post-election analysis was called "brilliant" by one supporter. Now the challenge is to turn these expressions of defiance into active socialists who will rebuild the road to those alienated workers who voted Tory or opted out altogether, strengthen the indissoluble links we already have in the trade union movement and in so doing move on towards our ultimate goal - the successful realisation of socialism.

Several hundred, mainly young people came out to demonstrate against the Tories in Glasgow on the evening after the result. There was a pro-Scottish independence mood and also cheers for speeches that defended Corbyn. Socialist Party Scotland member Ian Kerr - speaking as a Disabled People Against Cut's activist - got big cheers when he spoke of the need to support the postal workers and defend the right to strike as well as the need to build working-class action against cuts and universal credit.

Socialist Party Scotland's post-election leaflet calling for workers' action against Tory attacks, a mass mobilisation for a second independence referendum and an independent Socialist Scotland was well received by hundreds. Lots of people signed our petitions, supporting a fightback against Johnson and the Tories. The mood was defiant - an anticipation of the movement that is coming.