Ignore the hype - austerity goes on: organise to resist it 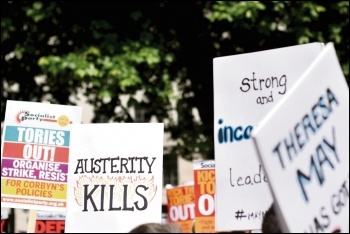 Writing in the Financial Times the day after the election, he says: "With the economy stagnating, public services struggling after nearly a decade of austerity... there will not be much scope for generosity."

He goes on to state that "an end to austerity... does not mean spending will rise to anything like previous levels. It just means that no further cuts are planned. Outside health, spending on public services will still be something like 15% down on 2010."

He finishes by saying: "What would really blow the fiscal framework out of the water, though, would be an economic slowdown - perhaps precipitated by Brexit or just because we are due one...

"Dealing with a recession now, after years of disappointing growth, a decade of stagnating earnings, debt at twice its previous level and public services struggling after the deepest and most prolonged period of cuts in modern history, would challenge any government."

So there we have it.

More proof that we have to organise now to resist the onslaught of attacks that are coming our way from this Tory government that, just like the others, will do everything in its power to make working-class people pay the price of an economic and political system that is rotten to the core.