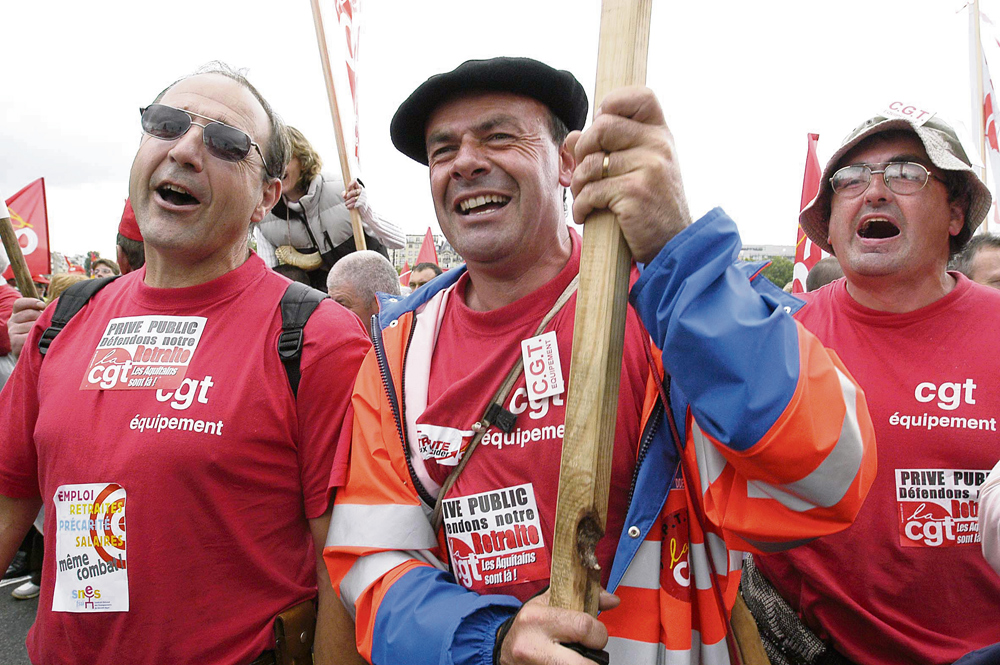 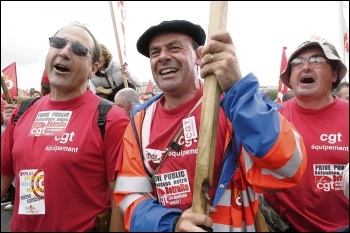 Workers on the march in France, photo Paul Mattsson   (Click to enlarge: opens in new window)

After the biggest and most widespread strikes and demonstrations last week in the current fight over pension rights in France, Prime Minister, Édouard Philippe, announced the suspension of the government’s proposal to increase the pension age from 62 to 64.

This is a climb-down, and one which undoubtedly wounds the prestige of the country’s president, Emmanuel Macron, who has tried to stand aside from the fray. Half-way through his term of office, Macron’s approval ratings remain at around one-third of the population while support for the strikers reaches two-thirds!

As more and more layers of the working population have joined the movement, the leaders of the most militant union federations the Confédération Générale du Travail (CGT), the Force Ouvrière (FO) and other smaller union organisations are not prepared to accept a partial victory.

The government is proposing a standing conference to discuss how to balance the financing of the pensions system by 2027 – i.e. at the expense of the working population.

Laurent Berger, leader of the moderate Confédération Francaise Démocratique du Travail (CFDT) has said it is prepared to participate in this – a process supposed to present results by the end of April. “There’s no catch!” says the prime minister!

But that’s not the feeling of the hundreds of thousands who are still striking and marching.

Wednesday 15 January to Friday 17 January are named as further strike days with the CGT leader, Philippe Martinez, calling on all workers and young people to send a clear message that nothing less than the withdrawal of all attacks on the pension system will be accepted.

These plans include a repeat of last Saturday’s demonstrations (11 January) with mass turnouts in towns and cities around France. They mobilised large numbers of protesters not involved in action on strike days as well as Yellow Jacket activists, still fighting against the Macron government for a better deal.

The country’s pension rights affect working people in every walk of life and the attempt to curtail them unites them all.

The current, powerful movement in France has involved some of the most unlikely strikers, from ballet-dancers to barristers.

In a number of places, electricity workers have cut off power to government and other establishments and thrown the switches to off-peak rates for supplying working-class households!

The pension system in France is regarded as ‘generous’ by French bosses and press commentators abroad.

But it is the result of decades, if not centuries, of struggle by the heroic French working class. It formed part of the reforms gained by revolutionary struggles during the sit-in strikes of 1936 and 1968, and was fought over in the victorious public sector battles of 1995.

Workers already finance the pension funds from their own income; why should they pay any more? If there is going to be a shortfall as the population ages, why can’t the bosses pay out of their ever-growing (and lightly taxed) profits?

The Yellow Jackets have been conducting a tenacious battle over the cost of living for more than a year. Workers have conducted isolated strike struggles to get even meagre improvements in their pay.

Yet, in the past year, the top companies in France have paid out record dividends. One of the placards on a demonstration last week read: “France – 6th world economic power. No retirement (pay)! No (social) care! Where is the money???”

Le Monde Diplomatique says of Macron: “A French president has seldom had so many debates with the people. News channels have shown him in shirtsleeves ostensibly engaging with crowds, listening, discussing, interacting and explaining”. Yet he is still seen as aloof and the ‘president of the rich’.

The struggle over pensions, successfully maintained now for more than five weeks, has pushed Macron and his government onto the back foot. Political parties of all stripes have begun to focus on the municipal elections of next March and it is widely known that the prime minister is aiming to go back to his old position as mayor of Le Havre. This would mean a major reshuffle in the prime minister›s team as some of the ruling En Marche officials leave with him.

The wave of protests against the current regime has not developed into an all-out general strike like that of May 1968, and is unlikely to this time round. But the CWI in France, Gauche Révolutionnaire (GR), has tirelessly called for the generalisation of the strike.

GR campaigns for decisions to be taken through discussion at mass meetings in the workplaces, the election of committees of struggle, and linking up representatives of workers at local, regional and national level. It spells out a socialist programme and the need for a workers’ government.

GR has also been the most consistent in demanding that Emmanuel Macron must go.

On one demonstration, a retired rail-worker displayed a hardening of the mood. He told a reporter he was losing patience. He had the feeling now that “heads must roll!”. Although this is France, he obviously did not mean in a literal sense, but in terms of those who had caused the present crisis being removed from their responsibilities!

If anything, the ‘concession’ on the pension age will increase the demonstrators’ appetite for a complete victory. Nevertheless, a temporary truce may be declared by the union leaders.

It has been made clear, through a massive show of strength, that ‘reforms’ will not be accepted, such as the abolition of early retirement from strenuous jobs or increased pension contributions from employees.

But it is becoming hard for the transport workers of the SNCF national rail network, the Paris underground services (RATP – state-owned transport operator) and RER – commuter rapid transport system and on the buses.

Most of them have been on strike the longest, and have had little or no pay. A strike fund which has collected well over €3 million from 50,000 contributors shows the level of support for the struggle, but cannot cover the wages of all strikers over any great length of time.

The leaders of the striking workers at the national and local level are confident that, even if the action has to be scaled back at some stage, it would not mean the fight is over. With a clear strategy and programme for the struggle, the mighty strength of the French working class can be mobilised with renewed determination for a fight to the finish.

The Philippe/Macron government should be under no illusion that the battle is over. The pension reform bill has to go through various levels of discussion before being put to parliament. Even if a pause is called in the generalised strike movement, skirmishes and partial strikes can break out at almost a moment’s notice.

On the other hand, Macron could decide to use special emergency powers, as he did in 2018 with the attacks on labour rights, and impose the plan for ‘rationalising’ pensions by decree.

Even such a measure would not mark a long-term abatement in the historic struggle between the classes in France.

This Thursday, 16 January, will actually see a new peak in the present strike wave with a call for everyone possible to take part. The workers in the ports are determined to block all traffic and hit the big companies hard. Rail workers have already voted to keep the strike going and, in the schools, anticipated new attacks from the government will face a growing mobilisation from school students and students in higher education, as well as the school teachers already involved in combat.

There is no doubt that the battle will continue and massive new confrontations are on the agenda.

NB, This article has been slightly updated since the version carried in the Socialist.