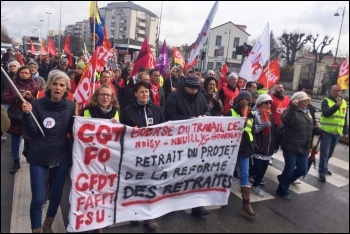 The strike movement against the French government's wholesale attack on pensions has gone on for almost two months.

Many transport workers downed tools for 45 continuous days, joined by some other sectors on the unions' national days of action.

The Socialist spoke to striking teacher Virginie Pregny, a member of Gauche Révolutionnaire, the Socialist Party's sister party in France, in Paris on 17 January.

Why are you on strike?

The strike started because of a so-called 'reform' about the pension system, which will result - if it were to be implemented - in a drastic fall in the pensions workers will earn.

Who has been on strike?

All the workers are really under attack. Public and private. The movement started on 5 December 2019, with a huge day of general strike.

And then railway workers, and metro and bus workers, kept on the strike. They were then joined by a few teachers.

After New Year, more sectors came on strike. So more and more teachers; but also civil servants in the city councils, for example; also some workers in the oil refining industry, dockers, etc.

So this has been a strike of about 40 days?

Yeah. Railway workers - and metro, bus workers, of Paris mainly - have been on strike for 40 days. But then in other sectors, the strike hasn't been on indefinite terms for most of them.

Obviously it's very diverse. But the common point is the determination, which is fuelled by the anger at this government.

All these ministers who demand us to work more, to earn less. And at the same time, they've been caught red-handed hiding how much they earn, not paying their taxes.

For example, the minister responsible for the pension reform - he earns more than €20,000 a month. Come on! And now he's telling us that pensions are too high, that there is no money, and that we need to cut our own pensions. So there is a real, deep anger.

The movement hasn't won yet. It's been a long strike. Is there still militancy?

There is still militancy. It's quite incredible. Today the Louvre museum was blocked by strikers. Tomorrow the opera dancers and musicians, who are on strike, will organise a concert somewhere.

You have school blockades; road blockades; everything that can be blockaded is blockaded at some point or the other!

And the interesting thing is that whenever you have an election meeting by Macron's party candidate [for the March local elections], it is disrupted.

The minister for women had an electoral meeting. And it was invaded by strikers, and she had to leave by the back door! 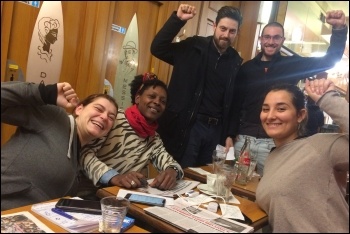 The government has said it is suspending part of the reform. One of the union confederations, the CFDT, has called off strikes for negotiations. What does this represent?

The suspension is not really a retreat. They announced it in the middle of a big demonstration, which is quite interesting - and you had people chanting: 'we are not suspending our movement!'

It's a way to try and break the movement - demobilise some sectors, and isolate the most militant workers.

The capitalists are aware of the radicalisation and the politicisation that is going on right now and that's what they fear.

It really looked for workers like an act. I mean, two weeks before the government announced the suspension, they insisted on this question of at what age you will be allowed to ask for your pension, 64, knowing that the CFDT would not agree.

And then they suspended it, so that this union came back to the negotiating table, and they could say: look - you see? We are negotiating! And the union was also happy to say: you see? We have an influence on the government! Very clever. But workers - they didn't buy it.

The CFDT union leadership have always been seen as traitors. In whatever circumstances, they will negotiate. And they're in big trouble inside their own ranks now, it seems.

We should call on these workers and tell them: OK, now, look at what your leader is doing. You don't have to accept this. Come with us if you think that we should strike now.

What next steps are needed for this strike to win?

There is the question of how do we generalise the strike. We have a massive strike, but we also know that it's mainly in the public sector for the moment.

Because for many workers, their wages are already so low, their living conditions are so difficult, that they think: OK - this pensions thing - either I die before I get it, or I earn so little that I'm not even sure I can claim a pension.

So we need demands that link the pension reforms to all the other attacks, and workers' real conditions. So on wages, housing, public services.

How can that struggle be organised?

For the moment, the strike relies on the workers' determination. Because the unions hadn't been organising much prior to this, there are some weaknesses - in terms of demands, in terms of democratic organisation.

We need to elect representatives who then would come back to the workers and be answerable for their actions.

There are a lot of workers' traditions that have been lost in the past period. For example, when you are on strike, going to your next-door workplace.

Call on the workers, have a leaflet, discuss why you are on strike, why they should join.

[Left-wing political leader Jean-Luc] Mélenchon had some good publicity and good votes in the last election.

But he is saying there is a difference between the social movement and the political movement; that it's not his responsibility to teach workers what they should do.

So obviously this is not helping. We need a workers' party.

We also have to challenge the leadership of the unions. They are not proposing a strategy for the strike.

They are just following up: OK, workers are on strike, so we are just behind. And if the movement retreats - because after 40, 50, 60 days with nothing, people will go back to work - the unions will say: OK, we've tried, but we've lost, and that's life.

So it's really urgent now that we reclaim our unions. And that's also part of the work that Gauche Révolutionnaire is trying to do.

Of course, we are trying to recruit to Gauche Révolutionnaire. But we are also trying to build the unions on a fighting, democratic programme, with a strategy for the strike.

Arming the workers with ideas so they can intervene in the union, organise other workers, and try to eventually be in a position where we can have fighting, democratic unions.