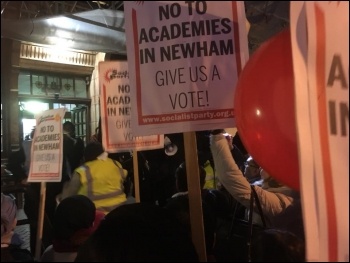 National Education Union (NEU) members at St Michael's and St Bon's in east London are on strike again 12-13 and 25-27 February. St Bon's workers were particularly incensed when the head teacher made an offer and then withdrew it.

These are Catholic schools. The diocese wants all its schools to join a multi-academy trust.

Academy privatisation has been ruled out for five years at St Angela's. And Bede's in Romford has voted 74% to strike on a 90% turnout.

Newham council has an anti-academy policy. It should use its powers to help the campaign to keep schools in community control.

Other Newham residents are furious with Labour mayor Rokhsana Fiaz. The mayor has refused to rule out gentrification of Queen's Market in Upton Park, £48 million more cuts, or guarantee the future of Hamara Ghar sheltered accommodation.