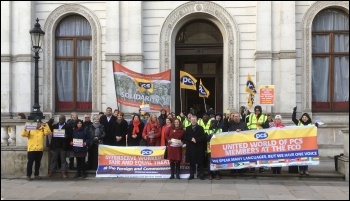 One week into a month-long strike PCS union members working for Interserve at the Foreign and Commonwealth Office in London were joined by the Trade Union Congress and PCS general secretaries and Labour Party Socialist Campaign Group MPs, including Jeremy Corbyn, on their 11 February picket line to mark 'heart unions' week.

These cleaners, security and maintenance staff, many of whom are migrant workers, are fighting to be properly paid and, crucially, for union recognition. And as many of the strikers say, they should be brought back in-house! Socialist Party members have been supporting the pickets almost every day and will continue to show our solidarity.