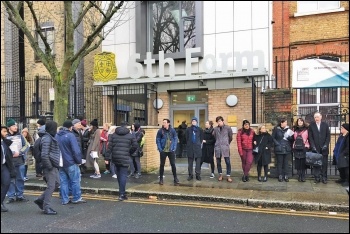 It's the first picket line since the latest round of anti-academy strikes started. The schools have been closed every day of the strike. Unless academisation is halted, both schools will be striking again. And they'll be joined by St Bede's in Romford.

All the schools are part of the same diocese, which is forcing them to join a multi-academy trust against their will.