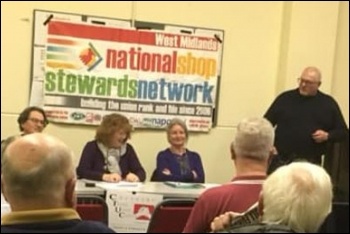 Clive (stood, right) speaking at a Coventry meeting of the NSSN, photo by Socialist Party   (Click to enlarge)

Clive, a Unite the Union rep at National Express in Birmingham and National Shop Stewards Network (NSSN) national steering committee member, is appealing against his dismissal by the company, which we believe is totally disproportionate.

The date of his appeal hearing will be announced, email protests to travelcare@nationalexpress.com.