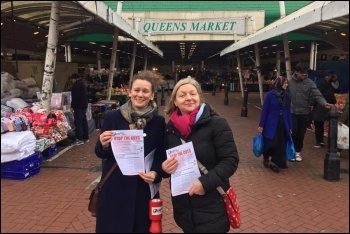 Newham's mayor has announced £45 million more cuts. Rokhsana Fiaz prefers to call them 'savings', but the reality is that more services will close, jobs will be lost and council-owned assets sold off.

Newham is just about the poorest borough in London. Already services have been cut to the bone. We say enough is enough.

Newham council should refuse to carry out the cuts, and instead use its reserves to set a budget which meets our borough's needs.

The council are 'consulting' on the future of Queen's Market and Green Street. The first phase of consultation is about winning a £2 million payment from City Hall - to be matched by funding from the council.

It is a quality council-owned service. Its future should not be up for discussion.

Our community has to say loud and clear, we will fight any threat to Hamara Ghar. It must remain council owned. The residents should say 'we are not moving'.

More sheltered accommodation, Terry Waite House in Canning Town, is under threat. This council was supposed to be different from former Labour mayor Robin Wales - who carried through cuts to services and sold off public assets - and the Tories.