The CWU then called for a period of calm for serious negotiations. At the first meeting, management informed the CWU that it was going to push through its changes and smash the ‘Four Pillars’ national agreement to pieces.

Royal Mail has declared all-out war with the CWU, which is viewed as one of the most combative trade unions in the country. It’s clear that management has taken confidence with the election of the Boris Johnson government, and believes that now is the time to take us on.

It’s also very clear to the membership that we will need serious action as management is forcing change all around the country. This must be met at the very least with a 48-hour stoppage as a first step, which can then be built on.

But we must also take our dispute to the rest of the trade unions and make a call for the whole movement to support us by all the means required – and demand that the Labour Party maintains its policy of renationalisation of Royal Mail, no matter who the next leader is. This is a fight we can’t afford to lose. 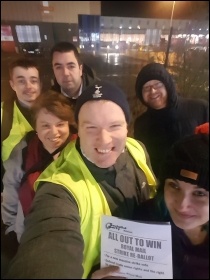 Ross Saunders says: “At the sorting office in Cardiff (above) the reception was warm even if the hailstones weren’t. Delivery workers gave us the thumbs up as they drove away waving our leaflets. A local rep stopped his bicycle to chat and reported the mood was optimistic about beating the turnout threshold, angry at the violation of the democratic right to strike and determined to deal the company a blow in defence of members’ interests.”