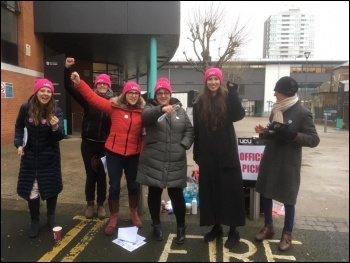 Over 250 lecturers at University of East London (UEL) have contracts no longer than one term. We went down to support the University and College Union (UCU) before they start a week of strikes next week - both picket lines in Stratford.

UEL workers have their own workload issues they're angry about - they're starting extra 'short of strike' action soon too, unless management back down immediately. They were boosted by pink union hats and teachers playing the drums. 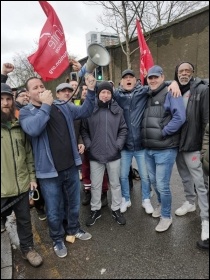 Workers, members of Unite the Union, work for Veolia, which holds the refuse, recycling and street cleaning contract for the borough. The contract is being brought back in-house next month.

Despite reaching an agreement with Unite and other trade unions on the calculation of holiday pay in August 2018, Veolia owes around 150 workers significant sums in arrears. The firm's UK waste management division generated revenues of nearly £1 billion in the first half of 2019.

Unite members, who voted 96.5% in favour of strike action in a ballot with a 70% turnout that was held earlier this month, are out for seven days starting on 9 March.