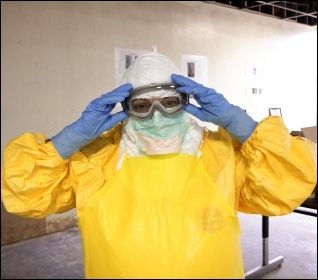 The coronavirus pandemic in the UK has not yet passed its peak. Hundreds are still dying every day, and yet the pressure is mounting for the Tories to announce an 'exit strategy'.

But where is that pressure coming from? Not from ordinary people. Even though many are really struggling financially - three million are going hungry according to the Food Foundation.

Of course, most would like to be free to leave their homes and go back to their normal lives. But despite the frustration, they also understand the health reasons behind the order to 'stay at home'. We have to fight for working-class people to have the financial means to feed themselves adequately and pay the bills while they are doing so.

There are genuine concerns among many people about the effects of a prolonged lockdown on jobs, mental health, education and domestic abuse. But here, as in other countries around the world, it is big business and their representatives in government who are baying the loudest for a way out of lockdown - and their main concern is not the health and welfare of working people but preserving their profits.

A credible exit strategy "would no doubt go a long way towards reassuring investors", said an editorial in the Times. The former head of the British Chamber of Commerce also wrote, "the cost both in human terms and to the economy mean that the cure is worse than the disease".

In Italy, the bosses' union Confindustria is complicit in causing unnecessary deaths because of its insistence on keeping non-essential industries going at the start of the lockdown there. Now its spokespeople in the four regions in the north hardest hit by the coronavirus crisis have banded together to once again pressure the government into prematurely lifting restrictions on business - effectively playing Russian roulette with more workers' lives.

In Spain, the government has accepted the demands of big business, and manufacturing and construction workers are being sent back to the factories and sites.

And the government has made it clear it expects workers to make up for lost hours with overtime and not taking paid holidays.

Here, construction, manufacturing and logistics industries have been sent new watered-down and dangerous guidance from the business secretary, Alok Sharma, saying that work could continue if done in line with social-distancing rules "wherever possible". And if it's not possible? They can get advice about how to still stay open!

It's clear from all the reports from workers that we have carried in the Socialist over the past few weeks that social-distancing rules are being constantly flouted by employers who prioritise profits over health.

We only have to look at Royal Mail, and the numerous local walkouts that have taken place there because of threats to workers' health and safety. Or workers in the Passport Office, callously told to go back to work by the Home Office because; "You are no more at risk at the workplace as you would be in your home or at the supermarket. It is about minimising it. We are working on the assessment that 80% of us, if we haven't already, will get the virus. We cannot hide away from it forever".

Although the lockdown is continuing for now, workers have to prepare to resist any future attempts to put lives at risk. Such as a possible "youth first" strategy, for example - one of the proposals being touted for a 'phased' exit - where 20 to 30 year-olds who don't live at home would be sent back to work like canaries down the mine.

There are enormous tensions within the government over the way forward. Rishi Sunak, backed by Boris Johnson, most clearly reflects the calls from big business for an early exit, while health minister Matt Hancock has been more cautious about the health implications of such a move.

But the Tories' strategy has been one of zig-zags and confusion from the very beginning of this crisis as it has tried to weave a path between profits and health.

This, and over a decade of austerity, have added to the number of both NHS staff and patients dying in hospitals, as well as the terrible tsunami of deaths in care homes, which do not even feature in the daily official statistics.

These divisions are likely to intensify as the crisis continues. The "jam tomorrow" testing policy, as it has been called by NHS chiefs, can only increase the difficulties of finding a way out. Epidemiologist Julian Peto has said that 10 million antibody tests a day would be needed for the lockdown to be lifted.

Everyone is agreed that the corona crisis will have a devastating effect on an economy run on capitalist lines - much worse than the Great Recession triggered by the 2007-08 financial crisis. But workers health and lives must not be sacrificed so that the big business profit system can remain intact. Capitalism is not the only way of organising an economy.

This crisis has shown that billions - trillions even - can be found if necessary. It's just a question of who controls the wealth in society and what they decide to spend it on.

In the Financial Times on 4 April, Philip Stephens wrote an article about 'paying for the pandemic' in which he summed up the dilemma the capitalist class is facing. "Low-paid workers in precarious employment took the hit after the 2008 crash", he wrote; "they will not be willing to do so again". "A return to austerity would be madness - an invitation to widespread social unrest, if not revolution".

And he added: "A little more welfare spending here, a touch of intervention here, and a dose of protectionism in strategic sectors are considered enough. They won't be". We would absolutely agree with that. But the answer is not, as he and other commentators have argued, a "new social contract" on the basis of a bankrupt capitalist system whose failings have been so clearly exposed in this crisis.

A genuine exit strategy - not just from the pandemic, but from the austerity, poverty and exploitation that the capitalist profit system generates - will only be possible in a fundamentally different kind of society.

This would be based on public ownership of industry, services and finance, in which the planning that governments have been randomly groping towards in this crisis - to build the hospitals, secure essential equipment such as ventilators and masks, distribute food, etc - could be extended to the whole of the economy.

Working-class people could then democratically decide and prioritise where the enormous wealth that already exists, and will be created in the future, should be spent.

The Socialist Party is fighting hard to defend workers' health, safety and livelihoods in the face of the coronavirus crisis.

We are helping to build trade unions and a working-class party - as defence organisations during the pandemic, but also as organisations that can proactively fight for the socialist society we need to combat disease, poverty, exploitation and environmental destruction.