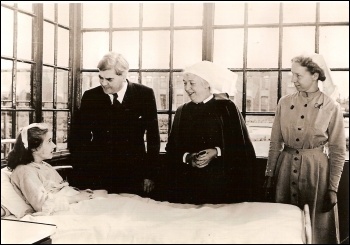 Labour’s Nye Bevan speaking to one of the first patients to be cared for under the newly founded National Health Service. photo University of Liverpool/CC   (Click to enlarge)

In the fourth article in our series 'war, global crises and working-class struggle', Socialist Party national committee member Tom Baldwin shows how working-class expectations were transformed by World War Two and the impact this had on the initial post-war period.

Pay had been low and incomes often insecure. Dockers could be hired for just half a day at a time. Working-class people in cities had to contend with slum housing conditions and rapacious landlords. Wartime rationing had actually improved the diet of a lot of workers who couldn't afford nutritious food. These conditions, combined with the cost of private healthcare, meant that ill health was rife.

After the sacrifices of the previous six years, however, things would not be allowed to go back to the way they were before. Having won the war, workers would now win the peace. Returning soldiers echoed the demand that followed the First World War - a land fit for heroes. The elements of planning and state direction of production that had been used to support the war effort had given a glimpse of what was possible if the economy was planned for the benefit of ordinary people.

The 1945 general election saw a landslide victory for Labour, sweeping to power on a programme of radical reforms. The wartime coalition government was dissolved and the election took place just two months after victory over the Nazis was declared, while the war with Japan was still continuing.

Myths have subsequently been built up about Churchill being 'the Greatest Briton', yet his Conservative Party were unceremoniously dumped at the first possible opportunity. His strong public support during the crisis of war didn't translate into peacetime.

Labour's manifesto was influenced by the 1942 Beveridge report, which had identified five giant evils - Want, Disease, Ignorance, Squalor and Idleness. The proposed solution was the building of the welfare state, providing social security from cradle to grave.

Its centrepiece was the NHS, established under the Labour left-winger Nye Bevan. This ensured, for the first time, that everyone had access to public health care, free at the point of use.

Publicly owned council housing was built. Key sections of the economy were also nationalised. These included coal and other energy production, railways, the Bank of England, and the iron and steel industries. Around a fifth of the economy was taken into public hands.

Labour's manifesto declared it to be "a socialist party, and proud of it." Upon the opening of the new parliament, Labour MPs sang the socialist anthem The Red Flag, much to the dismay of their Tory counterparts. Yet for the more right-wing Labour Party leaders, these reforms were not to be a stepping stone towards socialism. On the contrary, they were necessary measures to protect the capitalist system.

State investment was needed to help rebuild from the devastation of war. The industries that were taken into public ownership had mainly been failing.

Nationalisation was used to shore up these vital props of the capitalist economy. Just as had been the case with the war economy, even capitalist politicians were forced to recognise that their preferred system of the unplanned, private 'free market' was not the best way of delivering what was needed.

Moreover, the government was pushed into action by pressure from below. During the war, workers had acted collectively to protect one another. This including breaking into tube stations to force their opening as air raid shelters, an action led by Trotskyists.

These lessons were not forgotten with the end of the Blitz. Workers' struggles placed demands upon the new government. For example, homeless families occupied former army bases and empty hotels, compelling mass house building.

Labour's leadership was driven to act by events, carrying out left-wing policies that many of them disagreed with.

Just a year before the election, right-winger Herbert Morrison had showed his disdain for expanding public ownership. He took aside the mover of the successful resolution for nationalisations at Labour's conference, saying: "That was a good speech you made, but you realise, don't you, that you've lost us the general election?"

The Labour right may have been slow to grasp the public desire for change, but that desire actually went even further than the reforms carried out by the 1945 government. Despite the huge swing to Labour, the Communist Party still won a seat from them in East London.

The shift in workers' outlook was by no means limited to Britain. A revolutionary mood swept Europe. Having driven out the Nazis, resistance movements began demanding socialist change. There were waves of strikes, and the control of some factories was taken by workers' committees, even in the formerly fascist countries.

Labour's leadership conceded far-reaching reforms in order to prevent revolution. They ensured the reforms remained within certain limits. Nationalised industries were not controlled by workers but by the former heads of private firms. The 20% of the economy that was in public ownership was dictated to by the 80% that wasn't.

Because they remained within a capitalist framework, the reforms have been chipped away and reversed over the succeeding years. This began as early as 1951 with the introduction of charges for dentists and opticians. Nye Bevan walked out of the cabinet in protest, spelling the beginning of the end of the post-war Labour government.

The NHS is now an underfunded and fragmented patchwork of public and for-profit providers, leaving it in a weakened state to deal with the Covid-19 pandemic.

While the current crisis is of a very different nature, there are some parallels with the World War Two situation. Boris Johnson clearly thinks he's Churchill, appealing to a 'Blitz spirit'. This is largely mythical, rich and poor weren't 'all in it together' during the war and aren't today.

Johnson may find himself facing the same fate as his hero. Unfortunately, Labour, shifting to the right under Keir Starmer, is not putting forward any kind of alternative.

Nevertheless, coronavirus is laying bare the weaknesses and inequities of capitalism. Beveridge's five evils resurfaced in the period of austerity capitalism. Working-class people today have no desire to go back to the way things were either.

We demand a world fit for heroes. Today's heroes aren't returning from war, they're saving lives in our hospitals, they're transporting food, collecting bins and staffing supermarket checkouts.

These and other key workers are keeping society running through the crisis. They're doing so without sufficient protective equipment and often for poverty wages.

Billionaire bosses are not on the list of key workers, they play no useful role in society. It is workers that make and deliver everything of value, even in ordinary times. The capitalists are no more than parasites, profiting from the labour of others.

The Socialist Party fights for every possible improvement for the working class, but we don't just want a society where we're taken better care of. We want a socialist world where our class gets the full fruits of its labour. Workers make society run - we must run society.