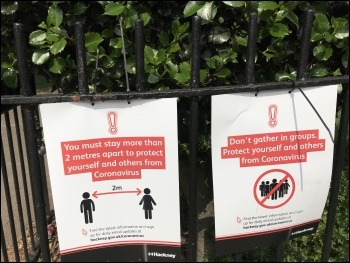 Boris Johnson has filled me with dread. Construction workers are being thrown to the wolves. It's going to be impossible to socially distance on building sites.

A muddled, vague plan, but with higher fines for those who don't get it right.

And the schools! Have I got it right? Reception, year one, and year six to go back first. How the hell does he expect five and six year olds to socially distance?

Boris oversees a system, capitalism, that puts its profits before our safety. We need to fight to keep each other safe.

So category 5 is 'material risk of overwhelming the NHS'? We're at 5 now, and we have been for years.

One in nine nursing positions are unfilled. We keep getting corridor queues, thousands of avoidable deaths routinely, and historic firsts of junior doctors and nurses striking.

Just a couple of winters ago we had the Red Cross coming into hospitals to help us. To even get to '4' we need the NHS to be fully staffed, debt written off and all facilities back under public ownership.

Government does not care

Make no mistake. If we genuinely lived under a government that prioritised the physical and financial health of the nation, they would not even be thinking about schools going back in June. But no school means fewer workers at work, which means a slowed economy, which means less profit.

If they cared about poverty they'd levy a 50% tax on the wealthiest in the UK - combined wealth of £700 billion - and introduce a basic income so people could both remain safe and be financially secure.

Boris Johnson is not a changed man looking to keep us all safe. He's a wealthy man, with wealthy friends, who haven't lost a wink's sleep over poverty deaths in ten years. They won't be crying over working-class cannon fodder anytime soon.

SNP and Tories: hand in hand

SNP now trying to socially distance themselves from the Tories, but they have been in lockstep. They went along with abandoning testing and contact tracing on 12 March, letting the virus rip through Scotland. And they do not have the capacity and resources, because of implementing cuts, to start again now.