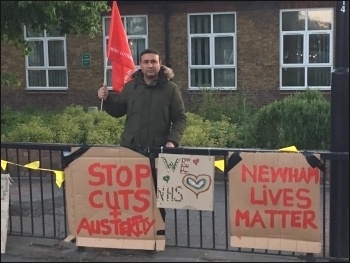 The Socialist Party participated in social-distanced protests on 7 May. More car cavalcades took place one week later, including in Sheffield and Haringey. Here we report on Southwark and Newham.

Southwark – No return to unsafe work

At the same time as the ‘clap for carers’, we wanted to make the point that it’s not enough just to clap for the NHS and other care workers, but we must protest the wholly criminal way the Tory government has handled the coronavirus crisis.

We had placards on the cars and loudspeakers saying: “No return to unsafe workplaces” and “keep the virus out of the workplace”.

Outside the hospital, as is now common, people had gathered on the pavement, keeping a safe distance, along with dozens of NHS staff to join in the clapping.

The trade union council is preparing to do this on a regular basis, next taking the message to schools.

The Socialist Party participated in another social-distanced protest following figures showing that Newham has the highest death rate in the country for coronavirus.

It is the poorest communities, whose workers work in the most essential services like nursing and bus driving, that suffer the most – they are the most exploited and least protected from the virus. For us, reflecting what many feel, clapping is not enough.

We arrived at Newham Hospital with our banners just as the staff were outside clapping. So we joined them – at a safe distance – and they welcomed our protest, held our placards, and posed for photos.

Four people on the protest safely bought the latest edition of the Socialist.