Link to this page: https://www.socialistparty.org.uk/articles/30806 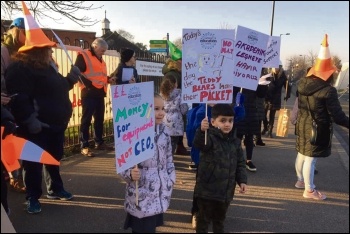 In refusing to back down from his plans for primary schools to open more widely in England on 1 June, Johnson has shown complete disregard for public health. But a firm stand by trade unions, schools and parents can force the Tories back.

For the Tories, getting the youngest children back to school was only ever about one thing - putting childcare in place for employers to be able to bully working parents back to work.

By correctly questioning the lack of scientific basis for government decision-making, the trade unions, led by the National Education Union, had hoped they could convince Johnson to reconsider.

The BMA and the Independent SAGE group have both given backing to the NEU's insistence that, to end lockdown safely, the government has to first make sure proper systems for testing, tracing and isolation of new Covid outbreaks are securely in place.

But the Cummings crisis has shown that Johnson and the cabal around him are prepared to brazenly justify the unjustifiable. On schools, they are going to ignore both medical and trade union opinion to try and force through a rapid end to the lockdown, come what may.

The Tories also hope to show they can brush aside trade union opposition and score a victory ahead of the even bigger battles to come over jobs, cuts and incomes as the economic crisis unfolds.

The school staff unions, backed by parents and trade unionists, have to make sure Johnson's gamble does not come off. The movement has a real opportunity to show how, by standing firm together, the Tories can be beaten back, for the sake of all in our communities.

Johnson knows his plans will be opposed. He is prepared to accept a slower return to secondary schools where unions are traditionally better organised and childcare for older children is also less of a priority.

He has also had to recognise that many primary schools will also phase in pupil return more gradually than he wanted.

However, he is planning on a critical mass opening quickly, and then others following suit, all before it is safe to do so. A united battle is needed to make sure his plan fails. Individual staff and union groups must not be left to fight alone.

"Only when it's safe"

A clear national call to action needs to be issued. All the school unions must make clear that the necessary public health measures are not in place and that, therefore, no school can be a safe workplace to open more widely.

School staff are ready to respond to such a clear call to action. The NEU's slogans of "only when it's safe" and "not until the 'five tests' are met" have been embraced and understood both by school staff and more widely amongst large numbers of parents and the wider school community.

Anyone who understands education knows that social distancing cannot be securely maintained in a primary school and the steps that will have to be taken, such as removing play areas and keeping infants apart, will be emotionally damaging too.

Union reps must insist on risk assessments that confirm schools have taken every step that they can to minimise risk. But, even then, wider opening will not yet be safe because the critical actions that need to be taken are outside schools' control.

Until the government acts to put tracking and testing in place and get infection rates lower, opening schools more widely threatens to create a deadly 'second wave' of the virus.

As the last few months have shown, it will be the families who already suffer the most disadvantage and discrimination that will be hit worst of all.

Those arguments have been heard and passed on through union and parents' meetings. Now they have to be translated into action.

The NEU has recruited thousands of new members and hundreds of new workplace representatives in the last days and weeks. Huge online meetings, the biggest 20,000-strong, have been held.

They have heard NEU leaders correctly explaining that safeguarding and health and safety legislation put obligations on employers to protect both staff and the wider community, obligations that cannot be met when the union's 'five tests' have not yet been met.

They have also heard how sections 44 and 100 of the Employment Rights Act 1996 give protection to staff who reasonably believe that they would be in danger if they returned to an unsafe workplace.

Now those rights need to be urgently confirmed in messages to every member. Unions should advise members to meet online together in workplace groups and across employers to discuss their legal rights.

Reps must make clear that unions will be backing members who refuse to enter an unsafe workplace and call on heads to refuse to implement Johnson's reckless plans.

Let the Tories bluster about 'illegality'. Legislation gives far greater rights to staff than the rights claimed by Dominic Cummings in his trips around the country - and the public will understand that too.

But, as ever, the best defence for workers is acting together. School staff right across England should, as one, refuse to put themselves in danger.

The whole of the trade union movement must back the school staff unions. Every Local Authority must be lobbied to demand it opposes the unsafe operation of schools in its area. Unions can also encourage their members to help organise parent opposition too.

Union branches, trade union councils and community groups should follow the lead set in areas like Leicestershire, Coventry and Newham where big meetings for parents have already been held. Parental campaigns can bolster the confidence of schools and their staff to stand firm and put pressure on elected politicians to do so as well.

Yes, the stakes are high. But a firm response can make the Tories regret they chose to have this battle instead of putting safety first.

This version of this article was first posted on the Socialist Party website on 26 May 2020 and may vary slightly from the version subsequently printed in The Socialist.