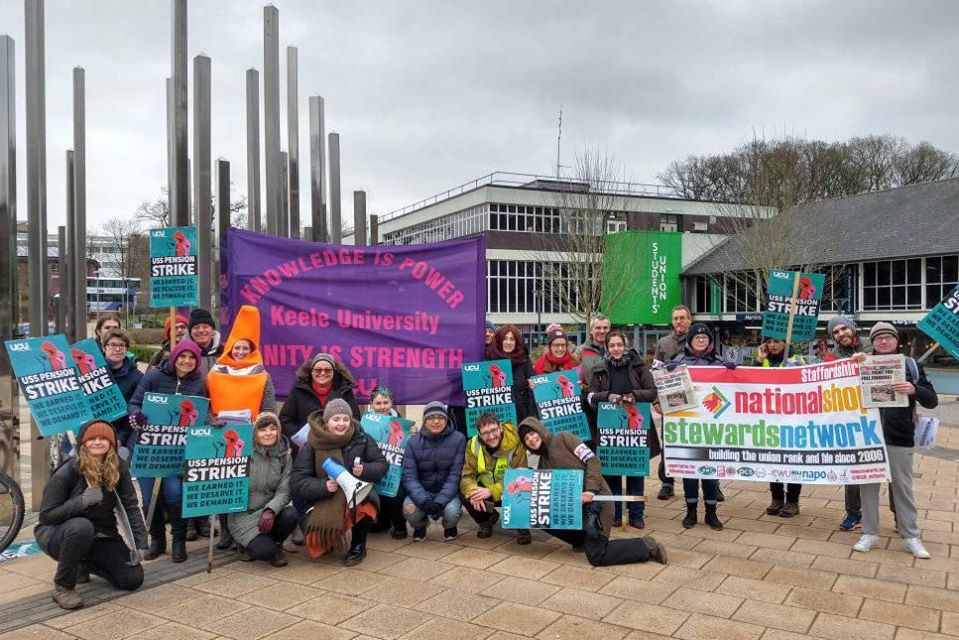 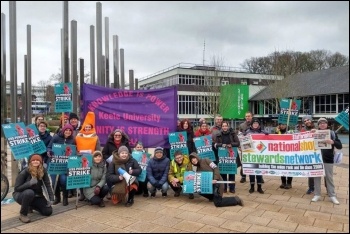 UCU picket line at Keele University in February before the lockdown   (Click to enlarge: opens in new window)

Over the last 12 months University and College Union (UCU) members have undertaken a determined struggle in the ‘four fights’ dispute, taking 22 days of strike action over pay, casualisation, workload and pay inequality. The most recent offer tabled by the Universities and Colleges Employers Association (UCEA) fails to move on key demands. But the UCU leadership is encouraging acceptance of the offer, capitulating to university management in the hope it can save jobs in the wake of the higher education funding crisis.

We reject the offer put forward by UCEA. It fails to make any movement on the current 1.8% pay offer, even though the value of higher education pay has been eroded by 20% in the last decade. Next-to-no progress has been made on workload, the ‘expectations’ set out on equal pay are essentially driven by legal frameworks and the casualisation ‘expectation’ provide get-out-clauses for employers. The offer does not bind university management to these ‘expectations’ and instead puts pressure back on local branches to implement and negotiate the key terms of the offer. Many activists rightly believe that accepting the offer in its current form is an abandonment of the most casualised members of the union. There are concerns that casualised staff are being sacrificed in an attempt to save jobs for permanent staff. It is vital that members stay unified – not only will the loss of casualised staff lead to increased workloads for retained staff, but ultimately membership divisions will weaken the union.

As previously reported in the Socialist, the higher education sector faces a major funding shortage due to anticipated falls in student numbers this September. Many members are understandably concerned about job losses arising from this crisis, questioning the strategy and timing for reballot in the ‘four fights’ dispute, previously scheduled for this month. The fight against Covid-19 related attacks on univeristy workers will not be advanced by accepting an unacceptable offer on the ‘four fights’ – these issues will only be exacerbated by the Covid-19 crisis, particularly job insecurity and a higher workloads.

Socialist Party members call for a rejection of the offer and demand that members are given an opportunity for a democratic discussion over the re-ballot strategy, in-light of the changes in our sectors’ situation. We call for a higher education sector conference to determine the next steps in the dispute. We say a re-ballot should be coordinated with other campus trade unions: cross union action is needed to defend jobs and higher education. The unions should immediately launch a campaign in defence of the sector, targeting not only the university employers but, crucially, the government. The funding crisis concretely poses the need for the renationalisation of our sector – the running of universities as a public service – and demonstrates the unsustainability of a university system based on fee-paying. Socialist Party members in UCU stand for the scrapping of fees, bringing universities under public ownership and under democratic control of staff and students.

We have reached a critical point for our union and our sector. We must refuse to pay for the cost of the higher education funding crisis through our terms and conditions. Students should also not pay for the crisis through increased fees and lower quality education – staff and students must stand together. This starts with rejecting the ‘four fights’ offer and the building of a cross-union campaign in defence of education.