Link to this page: https://www.socialistparty.org.uk/articles/30859 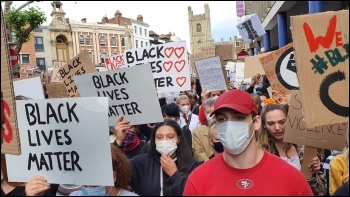 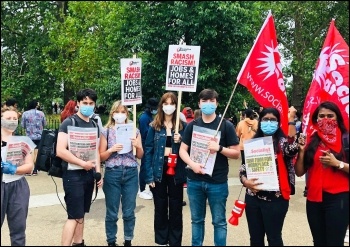 A sea of protesters, wave after wave poured out of the station. They'd stuck to the 'stay at home' rules for months. Now their accumulated anger burst out.

What brought 50,000 to protest in Hyde Park in central London on 3 June? The racist murder of George Floyd was the start of a litany of issues.

Placards and chants for Belly Mujinga - the London rail station worker who died from coronavirus after being spat on at work - were everywhere.

One of the young Socialist Party members on the protest said he'd never experienced a protest like it. And no wonder. The people on the 3 June protest have changed in the last three months, the pandemic has changed them. They're less forgiving of injustice and know who keeps society going - the working class. 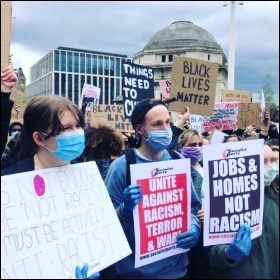 250 left with a copy of the Socialist. When protesters saw our headline 'fight racism, class inequality and capitalism' they dived at us to buy it. When they saw our placards 'jobs and homes not racism' they snapped them up.

Hundreds of pounds was donated to our fighting fund. And we handed out thousands of leaflets.

We said: build a united movement against racism and link the struggle to defeat it with the fight for jobs, homes and safety for all. And other protesters who spoke our mic agreed. How could they not? Black, white, Asian and minority ethnic working-class youth had come to protest in their tens of thousands.

The march set off across central London, going where it pleased. The police didn't dare try to stop it. It felt like that if this movement gets organised and links up with the organised workers' movement, things will never be the same again.

I was proud to stand with hundreds of protesters in Bradford's central square on 3 June, taking the knee to protest police brutality. What was overwhelming was the atmosphere of pure anger and the want to act.

It feels different to other protests. This movement feels more determined.

We did get some harassment from the police for having a stall, but stood our ground. None of the protesters had a problem with us having the stall. They queued at it to sign up.

All the speakers at the protest called for this movement to go beyond demonstrations. The main rally cry from the black and Asian youth present: this is just the beginning.

The youth are learning that it takes a fight, not just a march, to change things. One of the main speakers, a young black student activist, said racism started from slavery and those who enslaved black people needed to create a false ideology of 'backwardness' against black people.

In the speaker's words, this was used to 'pit us against each other'. We echo this sentiment - capitalism needs racism to sustain the wealth and power of a tiny minority.

Under capitalism, the mass of ordinary people must be 'losers' in order to prop up a handful of 'winners'. Racism is one of the main battering rams used against the working class to do this.

We are serious about building a mass movement against racism and we equip ourselves with socialist programme to defeat capitalism.

Over 500 overwhelmingly young people - a mixture of black, Asian and white youth - were united in saying Black Lives Matter and opposing racism in Hull.

The 3 June protest was called on social media by young people appalled by racism, and quickly spread like wildfire across the internet.

The speeches were full of anger at the police brutality in the US, but also said there's racist policing and racism throughout Britain.

Aneesa Akbar, the first BAME (black, Asian and minority ethnic) councillor in Hull, said we need to fight for council housing and jobs to unite white and BAME workers.

The speakers were all inspirational and harrowing, with personal experiences and anecdotes about their encounters with racism. But there was also the feeling of solidarity from such a large protest being held in Hull.

The question of 'where now' is fundamental. Speeches talked about systemic and institutional racism, but no mention of capitalism or the need for socialism. We gave out every Socialist Party leaflet we had, drawing the link between capitalism, austerity and racism.

Malcom X famously said: "You can't have capitalism without racism." The need to go beyond calling out only institutional racism and start calling out capitalism is vital.

The thirst and openness for new ideas was clear to see. The Socialist Party will continue to engage with youth furious at racism and police brutality, with a clear message of socialism and solidarity. 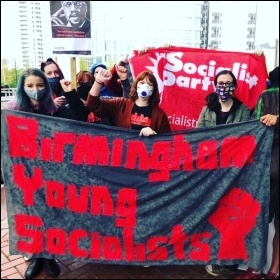 The protest was nothing like I'd ever been to. Thousands were listening to the Socialist Party's rolling mic, run by Deji Olay. Firefighter Dave Pitt got the crowd chanting.

15,000 working-class youth - black, white and Asian - came from the council estates. We sold out of everything. I emptied my car of every random leaflet I had left in there and they took the lot.

120 people left their names to join the Socialist Party and we raised £140. We sold 50 copies of the Socialist.

There were big cheers whenever anyone mentioned Grenfell, criticised gentrification or attacked imperialism.

For most protesters, it's gone beyond solidarity with the US. It's about Britain and the world. 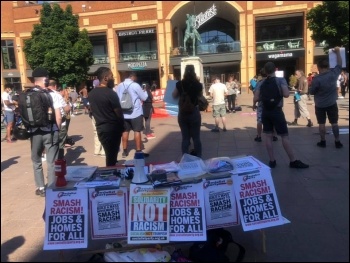 On Tuesday 2 June members of Coventry Socialist Party proudly joined several hundred people at Coventry's 'Justice for George Floyd' protest. Black youth led the protest on a spontaneous peaceful march across the city centre, rallying outside the police station twice. Protesters were furious at George Floyd's murder, the brutal response of US police, and the ongoing racism and police violence black people face in the US and here.

Chants of "no justice, no peace!" and "I can't breathe; black lives matter" rang through the city as the huge demonstration blocked roads.

Speakers called for justice for other victims of police violence including Darren Cumberbatch, a black man from Coventry who died in 2017 after police punched him 10-15 times and used a taser on him.

Some also spoke about the fight for black lives across Africa, where they pointed to the mass exploitation of black people across the continent at the hands of imperialism.

Socialist Party members brought leaflets, posters, and petitions calling for a mass movement to smash racism. We pointed to capitalism as the cause of racism and the need for socialist change and a united fight of all workers to end it. And our message was popular - we sold out of copies of the Socialist and ran out of our 300 leaflets before the protest ended!

There is another protest on Sunday 7th June which is expected to be even bigger, and Coventry Socialist Party will be there.