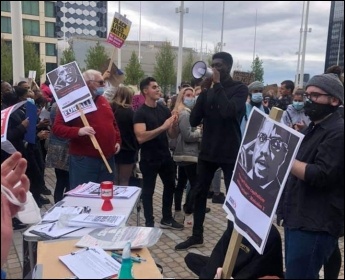 Extracts from a speech by Deji Olayinka, Birmingham Socialist Party, at the protest on 7 June.

My name's Deji. I'm a member of the Socialist Party. And I'm here for the same reason as all of you lot.

We don't own these stores, we just work in them. We don't choose these laws, these laws aren't for us.

We need to educate ourselves after this demo. Because these people, they promised us education, but all they've given us is tests, and scores, and bullshit qualifications.

We'll learn that racism won't go without changing the entire system. Because it's not just a few bad apples, it's structural problems.

Fred Hampton was a leader of the Black Panthers. And he built a Rainbow Coalition, uniting white people, Asian people and black people, against racism, sexism and capitalism.