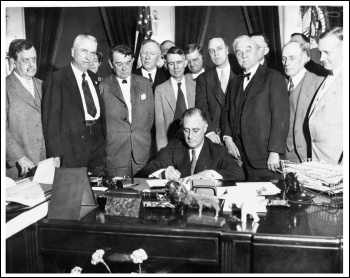 In the seventh article in our series on 'war, global crisis and working-class struggle', Socialist Party member Roger Thomas explains that today's talk by establishment commentators of governments introducing a modern-day version of the 1930s New Deal stimulus package to save capitalism, ignores the fundamental problem that US president Roosevelt's measures did not overcome the inherent contradictions of the capitalist profit system.

The present coronavirus crisis is tipping the USA into an economic depression which threatens the worst eco-nomic deprivation for Americans since the 1930s. The crisis has provoked comparisons to the situation then, but also revived the idea of a government 'New Deal' to rescue capitalism from the ravages of a severe recession.

The Great Depression saw a catastrophic collapse in economic activity. US GNP (total wealth) fell from $104.4 billion in 1929 to $94.4 billion in 1930 - a less dramatic fall than the earlier depression of 1921-22 but, on this occasion, there was no recovery.

The US economy shrank by around a third, and manufacturing industry by a staggering 50%. Corporate profits declined to negative values, and 40% of banks failed (9,490 out of 23,697). There was no insurance on bank deposits so closure meant the loss of the meagre savings of those impacted, especially in rural areas, where large numbers of small farms went out of business.

The effects on the working class were even more staggering. The level of unemployment rose from 3.2% in 1929 to 24.9% in 1933. This was likely to be an underestimate, as the cities were especially hard hit, with 700,000 unemployed in Chicago, for example - an incredible 40% of the total workforce.

In 1931, US Steel led the way by cutting its workers pay by 10%. Many other companies, such as General Motors, followed suit, reducing pay by 20% or more. The pay of women workers was cut even more steeply.

In early 1933 a skilled garment operator was netting just 58 cents for a nine-hour day!

Others were just laid off or placed on short time. With no unemployment relief, unemployment swiftly resulted in the rise in homelessness and the development of shanty towns ('Hoovervilles' - named after the president at the time, Herbert Hoover) in the major conurbations as people struggled to rely on charity for food relief.

Andrew Mellon, the treasury secretary, cynically advised Hoover to "liquidate labour, liquidate stocks, liquidate the farmers, liquidate real estate... it will purge the rottenness out of the system."

However, as time went on action became necessary. The Reconstruction Finance Corporation (RFC) was formed, which played a huge part throughout the next decade in dispersing millions of dollars in loans to business and finance. But a human pressure cooker was building up from underneath, which reflected itself in Hoover's defeat in the 1932 presidential election.

The New Deal is primarily associated with the presidency of Franklin Delano Roosevelt, who won for the Democrats in 1932. Born into the American ruling class, he went to Groton, the most exclusive private school, and then on to Harvard and Columbia Law School.

In the 1920s, he accepted the established capitalist economic orthodoxy. He opposed banking reform when governor of New York State, and in 1930 opposed Hoover from the right, accusing him of being too 'interventionist', for departing from capitalist 'laissez faire'.

What changed him was the collapse of his old world in 1929 with the Wall Street stock market crash; if it took radical policies to save US capitalism then he was prepared to do it.

Roosevelt entered office with huge political capital as people were desperate for a change of direction. His first 100 days saw a flurry of new policy initiatives directly intervening into the economy. He employed the idea of an emergency budget to finance programmes to move the economy forward, and banking reform to enforce greater regulation to prevent banking collapse.

The dollar was freed from the gold standard (the dollar had been pegged to a fixed amount of gold) and the export of gold was forbidden, except under government licence from the Treasury.

The Securities Act brought securities traded on the stock markets under control, and curbs were placed on Wall Street. Prior to this, companies were not obliged to provide information, and often published misleading and incorrect detail of balance sheets, profit and losses, and so forth.

Alongside greater regulation came the Public Works Administration (PWA), which provided funds for a major programme of public works, for things like government buildings, airports, hospitals, schools, roads, bridges, dams, and even projects and construction for the military. In its first year, 1933, 34,599 projects were approved costing $3.3 billion.

Similar schemes dealt with reforestation and the reclaiming of land lost through flood and soil erosion. The Tennessee Valley Authority (also involving electricity generation) was just one of the large projects.

In industry, the National Industrial Recovery Act established the National Recovery Administration (NRA), which was to set agreements within different industrial sectors to reduce overproduction, and stabilise the markets by encouraging set prices and wage agreements.

Big business was content, as it set minimum wages and allowed employers to circumvent the unions by encouraging the development of company unions.

The head of the NRA, General Hugh Johnson, saw the organisation as bringing business and government together to pull the country out of depression, and the unions just didn't figure in his endeavours.

The effect of the direct intervention into the economy was seen in a stabilisation of the economic position of the working class. Many were now back in work, and were anxious to share in this improving economic situation, and see some improvement in wages and conditions.

A number of unsuccessful union drives developed, but in 1934 three disputes blew open the situation in the workplace, and showed a growing confidence among workers to stand up to the bosses' repression and the 'open shop' (ie non-union) regime.

The disputes at Toledo Auto-Lite, led by the centrist (vacillating between reformism and revolution) American Workers Party, the Minneapolis Teamsters general strike, led by Trotskyists, and the San Francisco Longshoremen, led by the Communist Party, showed the way.

A split had developed in the American trade union movement (the American Federation of Labour - AFL) between a bureaucracy of conservative officials and an emerging layer of militant workers who wanted to increase the power of the trade union movement. The latter came to be represented by the Committee for Industrial Organization (CIO). The AFL leadership suspended the unions belonging to the CIO and in 1938 the CIO broke away, founding the Congress of Industrial Organizations.

The AFL tended to comply with the strictures of the NRA, which meant compromises and, more often than not, defeat. The CIO, on the other hand, wanted to unleash the movement's potential.

It also had a consequence. Roosevelt's popularity was waning, and his opportunity of a second term was in jeopardy. US capitalism was failing to deal with the aspirations and frustrations of thousands of workers.

The result was the Wagner Act, which removed company unions and brought in protections for young workers (agricultural workers and government employees were excluded). However, union 'closed shops' (ie employees must be union members) and 'agency shops' (non-union members must pay union fees if covered by a collective bargaining agreement) were later banned by the 1947 Taft-Hartley Act.

The Wagner Act gave private sector unions the right to organise, which was swiftly taken up. For example, the United Auto Workers union (part of the CIO), grew to 88,000 in February 1937. By March it had risen to 166,000, over 250,000 in April and 400,000 by October. This was achieved on the back of sit-down strikes (factory occupations) which surged as unions made to press home their advantage.

The economy plunged back into recession in 1937, following federal government budget cuts and an attempt to balance the books. The economic contraction was greater than 1929, with unemployment rising again and peaking at 10 million.

Production and profits declined and full employment only returned in 1941, with the USA's entry into World War Two. The economic disaster forced Roosevelt and Congress to reinstate government spending programmes.

Federal expenditure increased sharply. In 1929 it accounted for 3% of GNP, but by 1939 it had tripled. In his pamphlet 'Marxism in our Time', Russian revolutionary socialist Leon Trotsky commented: "The New Deal itself was possible only because of the tremendous wealth accumulated by past generations. Only a very rich nation could indulge itself in so extravagant a policy. But even such a nation cannot indefinitely go on living at the expense of past generations."

Indeed, the New Deal could not overcome the basics laws of the capitalist economy. The capitalist "does not produce for the sake of production but for profit", said Trotsky. New Deal interventions could only manage the crisis and not resolve it.

In the US today the Federal Reserve (central bank) has intervened to save companies threatened with going to the wall. It has bought up corporate debt on an unimaginable scale, including the purchase of high risk 'junk bonds'. US companies have issued $560 billion worth of bonds in recent weeks.

This explosion of deficit financing means the country's accumulated debt currently stands at 110% of US GDP (total output). While capitalism can continue with this situation for a period to manage the crisis, at some time it will be compelled to present the bill to the working class. This will trigger enormous class battles potentially on a scale like those of the 1930s.

What changed the situation for American capital then was the fear that their own social system was in jeopardy, and individual capitalist self-interest was not going to save the economy.

On the contrary, it threatened the profit system with mass working-class movements and social revolution. Therefore, for the more far-sighted capitalists, the price of enormous state intervention was worth the costs.

Similar thoughts are moving sections of the capitalists today. But just as in the US in the 1930s, Covid 'new deals' today will not solve capitalism's underlying problems. Only a socialist planned economy can offer a way forward for the working class.