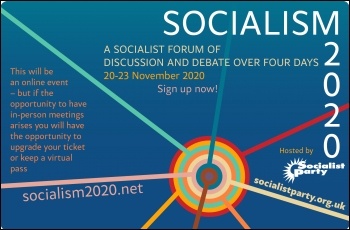 The need to discuss ideas to change the world is more pressing than ever.

Each year the Socialist Party organises a major public weekend event to debate socialist ideas. Around a thousand people normally attend the workshops and rallies. We cannot allow the current Covid restrictions to stop that happening. So we have gone online.

The Black Lives Matter protests have brought the issue of racism to the fore - but how can it be ended? Malcolm X said you can't have capitalism without racism. Can capitalism be reformed? Or do we need to replace it? How? With what? Who will do it?

Why should workers and young people have to pay for the corona and economic crises? But how do we make the fat cats pay? Are women being pushed back to the 1950s?

What does the end of the Corbyn era mean for the political participation of working-class people?

The environmental time-bomb still ticks. What is the socialist solution? And what is socialism actually about?

The opportunities to meet in person are limited. But the questions are burning.

Going online means we have been able to address the most common complaint we get at Socialism - that time limits mean people can only attend three workshops. This year everyone with a ticket for the whole event can attend seven discussions over the course of the four days if they wish. Or you can buy a bundle of three workshops - or just attend a single workshop for only £1!

Who should attend? Young people, whose future capitalist crisis puts in jeopardy. Campaigners in defence of jobs, conditions and public services. Trade unionists organising for fighting trade unions. Unless you're a member of the 0.001% you probably have a reason to want to change the world - so get a ticket for this event.

Of course, Socialism 2020 won't be the same as previous events - the chats over coffee, putting faces to names, perusing the extensive bookshop - all of this will not be possible. However, if the opportunity to have in-person meetings arises, you can decide to upgrade your ticket or keep a virtual pass. But, in the end, the most important part of the Socialism weekends is the chance to discuss with other people who want to change the world as much as you do.