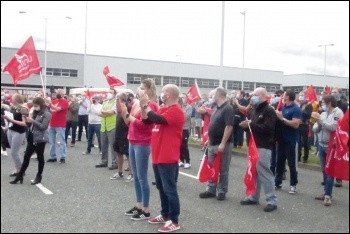 Around 500 Nissan workers joined a march and rally (pictured above) in opposition to plans to close their final pension scheme. The rally took place at the main gate of Nissan's Sunderland plant.

This is the first time in the plant's 33-year history that any form of protest has happened, and speaking to workers it is clear that if Nissan doesn't back down with this attack on workers' pensions, it will undoubtedly lead to more militant trade union action.

Steve Bush, Unite national officer, told us that Nissan management had taken an "arrogant stance" which was unacceptable. He went on to say he was really pleased with the turnout of the protest, which would put the union in a good position to negotiate with Nissan management.

Workers told us that Nissan had recently put out a DVD explaining the strength of Nissan in Sunderland was its workforce and team spirit - yet this is how Nissan wants to repay their workforce!

Now they have televised statements or emails sent out to them - Nissan are no longer interested in having a dialogue.

It was good to see a banner at the protest "Stay Strong Barcelona", in reference to the Nissan plant in Spain which is due to close.

International workers' solidarity is important as the attack on the Sunderland pension scheme is one part of Nissan's £2.3 billion cuts worldwide.

Nissan, in alliance with Renault, is using the Covid crisis as cover to cut jobs, intensify work, reduce capacity and pit workers against each other in the name of 'efficiency'.