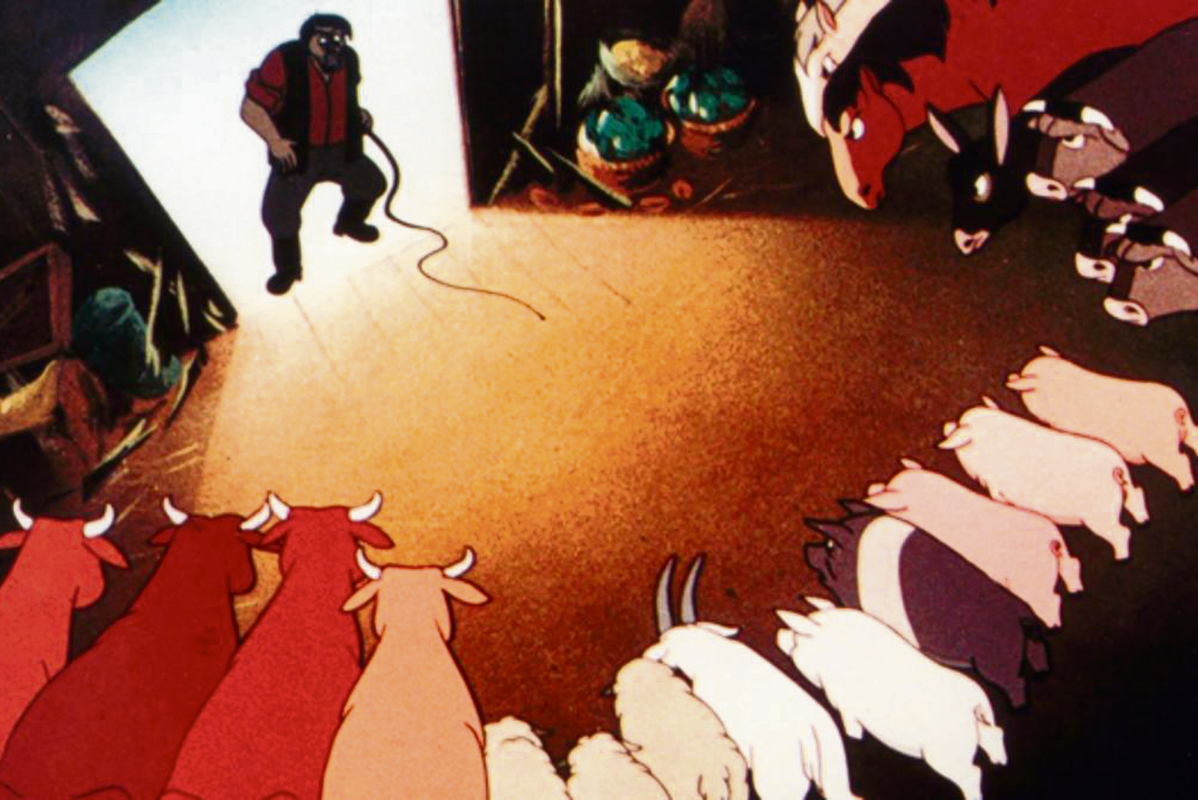 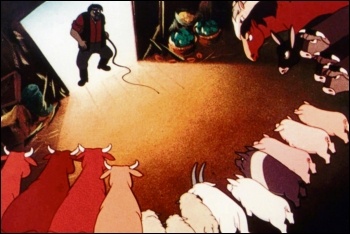 The revolutionary animals face down the farmer in the 1954 Halas and Batchelor adaptation of Animal Farm   (Click to enlarge: opens in new window)

George Orwell first conceived of “exposing” what he called “the Soviet myth” with “a story that could be easily understood by almost anyone” in 1937. He had narrowly escaped Stalinism’s murderous repression of his fellow revolutionaries in the dying days of the Spanish Civil War.

The result, published on 17 August 1945, was ‘Animal Farm: A Fairy Story’. Orwell had finished it in February 1944, but no publisher wanted to touch it while British capitalism was still allied with Stalinism during World War Two.

The advent of the Cold War made satires of the Soviet Union acceptable – even necessary – to the establishment. In fact, in 1950, the year Orwell died, Britain’s Foreign Office adapted Animal Farm into counter-revolutionary newspaper cartoons in Burma and Brazil. He would likely have been horrified.

The 1954 animated feature was funded by the CIA. And reflecting the collapse of Stalinism, the 1999 TV film inverted Animal Farm’s message entirely, ending with a restoration of capitalism under fairy-tale ‘nice’ farm owners. But what does Orwell’s fable actually say about revolution?

The working animals of “the Manor Farm” in England suffer enormous hardship at the hands of their drunken, bullying ruler, the farmer Mr Jones. The respected elder boar, Old Major – a composite of authoritative Marxist theoreticians – explains their woes are caused by human exploitation.

Decadent human mismanagement provokes a spontaneous uprising for fodder. Patient explanation of the tenets of “Animalism” by the intelligent pigs has allowed “the Rebellion” to blossom from it – an insurrectionary seizure of the farm. Its leaders are the visionary Snowball, representing Leon Trotsky, and the brutish Napoleon – Joseph Stalin.

The animals abolish all the old inequalities and barbarities. But little by little, their revolutionary principles are diluted, then betrayed. The novella leaves the working animals, hungry and brutalised once more, looking “from pig to man, and from man to pig, and from pig to man again; but already it was impossible to say which was which.”

As a satire of one of history’s greatest treacheries, it still packs a punch. Each injustice is made all the more stinging by the innocent style of a children’s story. The poignancy of the final betrayal of Boxer, the Rebellion’s most self-sacrificing workhorse, is almost unbearable.

The excesses and absurdity of the Stalinist bureaucracy are often hilarious. And Orwell’s recurrent theme of political falsification (which reaches its apex in his next novel, ‘Nineteen Eighty-Four’) even receives its own character, in the pigs’ propagandist, Squealer.

Animal Farm is remarkable for how many parallels with real episodes and ideas it crams into its short word count. But that’s not to say Orwell exercises no licence. Many key events and figures appear out of order, conflated, or without their proper context.

Some of this is inevitable and necessary in an allegory, of course. The trouble comes – as Orwell himself might have warned – when events are recast to suit ideas, rather than vice versa.

Orwell explained in a letter in December 1946: “I meant that that kind of revolution (violent conspiratorial revolution, led by unconsciously power-hungry people) can only lead to a change of masters… I think the whole process was foreseeable… from the very nature of the Bolshevik Party.” It is worth considering these accusations in turn.

First, violence. Orwell himself wrote in his 1941 manifesto for revolution in Britain, ‘The Lion and the Unicorn’, that “revolution does not mean red flags and street fighting, it means a fundamental shift of power. Whether it happens with or without bloodshed is largely an accident of time and place.”

In fact, diligent organisation and overwhelming social weight can counter the power of “accident.” This is why the October 1917 Petrograd insurrection was almost bloodless.

Second, conspiracy. The Russian revolution was a mass movement, not some palace coup. The Bolsheviks came to lead it by arguing openly for their ideas, including in the workers’ councils elected from below to coordinate that mass movement – the ‘soviets’.

Orwell mixes praise for workers’ potential for power and democratic debate with some ambivalence about their capacity to control events. The animals do hold mass meetings to decide policy, but in practice are always subordinate to the clever pigs.

Despite their power, therefore, Animal Farm quite wrongly depicts the workers as just too dense to resist Napoleon’s abuses. “Several of them would have protested if they could have found the right arguments.” Orwell means this as a warning, but it’s hard not to feel some pessimism behind it too.

Third, that political degeneration was “foreseeable” in the “unconsciously power-hungry… Bolshevik Party.” This is Orwell’s fundamental error, running throughout Animal Farm.

It suggests that Stalinism was inherent from the start due to some ‘original sin’ in the psychology of Bolshevism. On the contrary, Lenin, Trotsky and thousands of worker Bolsheviks fought – to the death in many cases – against encroaching bureaucracy and for workers’ democracy.

But from the off, Animal Farm’s pigs lust for power and material privilege – Snowball included. Orwell’s 1946 letter also states that “the turning-point of the story was supposed to be when the pigs kept the milk and apples for themselves.” This was during a time of peace and plenty on the farm.

So what does explain the political decay of the Russian revolution? The landlords and capitalists had proven unable to bring Russia’s economy and society fully into the 20th century. They dragged things back still further with years of imperialist war and then civil war. And the defeat of revolutions in industrialised Europe left the fledgling workers’ state without help.

As Trotsky explained in ‘The Revolution Betrayed’: “When there are enough goods in a store, the purchasers can come whenever they want to… When the lines are very long, it is necessary to appoint a policeman to keep order. Such is the starting point of the power of the Soviet bureaucracy.”

Nonetheless, he does sketch some of the fundamental differences between Trotskyism and Stalinism – albeit, unavoidably, in caricature. When Animal Farm is threatened by a new invasion, Napoleon’s proposal is to “procure firearms.” Snowball wants to “stir up rebellion among the animals on the other farms.”

Trotsky never denied the need for armed defence. He had organised the Red Army. But what Orwell depicts here is Bolshevism’s consistent internationalist outlook. Lenin and Trotsky explained that whatever the setbacks, this was the only way to complete the socialist revolution – and make it permanent.

But the demoralising defeat of the first workers’ revolutions beyond Russia led to hesitant outlooks among other Bolshevik leaders, such as Stalin. This process culminated in the notorious theory of ‘socialism in one country’, a complete reversal of Lenin and Trotsky’s politics.

At the same time, “the animals formed themselves into two factions under the slogans ‘Vote for Snowball and the three-day week’ and ‘Vote for Napoleon and the full manger’.” But why?

The Bolshevik government had its roots among industrial workers. But Russia’s working class was overwhelmed in numbers by the peasantry, which sometimes had different economic needs and interests.

Trotsky’s supporters saw developing industry – Animal Farm’s windmill – as the way to satisfy the peasants’ needs and raise the general standard of living. This was in anticipation of economic and social support from revolutions in advanced capitalist countries.

But despite the capitalists’ distortions, Orwell still stood for workers’ revolution. The animals do experience huge benefits after chasing out their exploiters. “I meant the moral to be that revolutions only effect a radical improvement when the masses are alert and know how to chuck out their leaders as soon as the latter have done their job.”

It is wrong to conclude that leaders, or parties, or revolution itself is the problem – the issue is democratic workers’ control. Orwell was right then, and is right now, that an active and critical working class is the best safeguard against socialist degeneration.