Now fight for a decent future for all young people 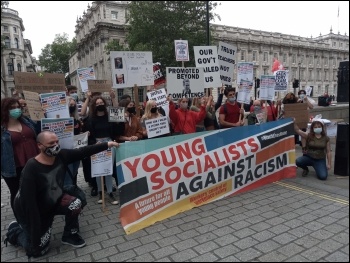 Protests and anger by school students have forced the Tories into a humiliating double U-turn over A-level and GCSE grade moderation.

The retreat arrived like the slow collapse of a set of dominoes - starting in Scotland, then Northern Ireland, Wales, and ending with England.

Coronavirus has exposed the class divide in the education system. Students are told all their lives that exam results are down to individual performance and hard work alone.

But the whole fiasco around A-levels and GCSE grades has proven the opposite. The moderating downwards of A-level grades disproportionately affected working-class students.

The algorithm used to moderate these grades was largely based on the previous historic attainment of schools - hitting underfunded comprehensive school students far harder than students who attended elite and private schools.

Despite this obvious class bias, students are drilled through incredibly high-pressured exam factories, and told that their individual performance will determine their life chances and future prospects for years to come.

The U-turn we've won from the government is a massive victory, which can only be chalked up to the protests and action organised by young people.

But alone it will not be enough to guarantee a decent future for young working-class people.

For young people, the fight is not over - it has only just begun. Even after the results U-turn, many students have already missed out on the courses or universities that they would have liked to study in. Some BTEC students haven't even been given any results whatsoever.

The only solution to this chaos, where for many students attending university is still uncertain, is for a massive programme of government investment in the universities.

This should give every student who wants to study access to a high-quality course of their own choosing.

And while they're at it, they should scrap tuition fees and debts, and reverse all privatisation and marketisation on campuses as well!

Thanks to years of Tory policies of privatisation in higher education there is a major funding crisis in the universities. But off the campuses, what future does capitalism offer students and young people?

Mass youth unemployment is looming on the horizon. There has been a total collapse in decent training and apprenticeship schemes for young people.

Wherever students go next after results day, they are going to encounter a system in crisis - and a Tory government which is trying to make young people and workers pay for that crisis.

That's why Young Socialists say we need to continue the fight - for a massive government programme of socially useful job creation and real training for school leavers, and for fully funded high-quality university, college and sixth-form courses, linked to providing every working-class young person with a decent future.

Get involved with Young Socialists and Socialist Students if you want to get organised and fight for our futures!

Don't fail the class of Covid!