Link to this page: https://www.socialistparty.org.uk/articles/31247 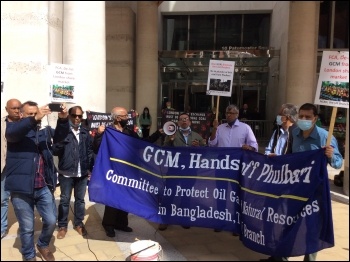 A vibrant rally and meeting was held on 26 August in front of the London Stock exchange, demanding the delisting of Global Coal Management (GCM, formerly trading as Asia Energy) for alleged fraudulent activities in Bangladesh.

The rally was held on Phulbari Day amidst social distancing and a strict police presence.

Phulbari Day commemorates the brave martyrs - Tariqul, Al-amin and Salekin - who were brutally gunned down by Bangladeshi police in 2006 while peacefully protesting against GMC's plans for an opencast mining operation in Phulbari. 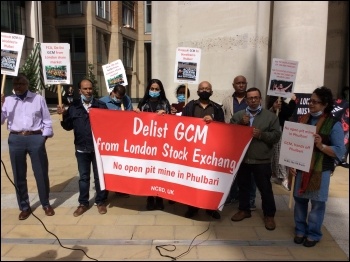 The mine would have displaced 40,000 people from their land according to GMC's estimate, it is alleged, and displaced up to half a million people, by other estimates.

At the protest, Member Secretary of the UK branch of the National Committee to Protect Resources in Bangladesh, Dr Akhter Sobhan Masroor, laid the blame for the brutal repression and killings in Phulbari on GMC.

He also reiterated the demand for the company to be delisted since they were trading without any legal or valid contract with the Bangladesh government.

On behalf of the protesters, a memorandum was submitted to the Chief Executive and Chief Financial Officer of the London Stock Exchange: David Schwimmer and David Warren. 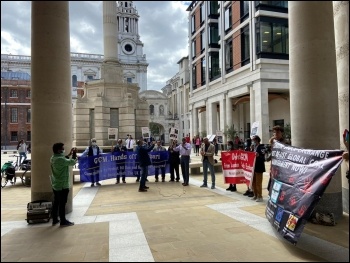 It contained a number of demands, including the immediate cessation of trading by GMC and an independent and impartial inquiry into their financial dealings.

Other speakers denounced the role of GMC and other multinational corporations which pursue their commercial interests to the detriment of people's lives, livelihoods and the environment.

See the full press statement in English and Bengali, and a video at https://www.facebook.com/National-Committee-to-Protect-Resources-of-Bangladesh-UK-Branch-100980838404961