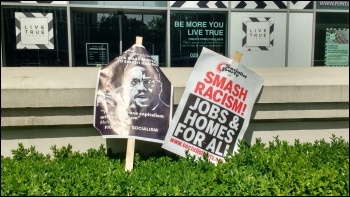 The protest also highlighted the case of Mercy Baguma, a Ugandan asylum seeker who was found dead in Glasgow next to her baby.

As demonstrators gathered, Socialist Party members started a street meeting to discuss how racism is used under capitalism to divide the working class and weaken its opposition to exploitation.

Campaigners for the family of Christopher Kapessa joined the march. Christopher tragically drowned in the Cynon Valley last year, but his death prompted no adequate investigation by the police.

Camilla Mngaza spoke powerfully about the treatment of her daughter Siyanda. She was jailed for four years for Grievous Bodily Harm (GBH) after she defended herself in a racist physical attack.

The Socialist Party call for democratic control of the police by workers' organisations was very well received. Campaigners know that they must harness the anger of the movement to radically change the way society is run, or racist police violence will continue.

Wokingham: This is political

This was the first Black Lives Matter (BLM) protest organised in Wokingham. Speakers gave many personal accounts about the effects of racism. 200 people attended, including a significant number of black youth.

The Socialist Party was the only organisation to produce material. And we had an excellent response - lots of people wanted to know more and what needs to be done to build an effective campaign to smash racism.

But we were disappointed that two of our black members taking part were not allowed to speak because they were "too political" in the opinion of the organisers. This fight has to be political - to take on the system that leaves black, Asian and minority ethnic (BAME) workers four times more likely to die from Covid, and hit hard by austerity and the housing crisis.

For the BLM movement to develop, we need a democratic and inclusive debate about what we are fighting for and how we are going to achieve it. A united working-class movement involving the trade unions, fighting for socialist policies of jobs and homes not racism, has the potential to do this.

On the Black Lives Matter protest on 22 August, even 13 and 14-year-olds were picking up our placards and signing up to come to our youth meeting. To win the demands of the movement, we need to be organised around a programme to tackle racism.

The unions must fight for the whole workforce, including BAME workers - for better pay, terms and conditions and against racism. The struggle for decent living conditions - jobs, homes, youth centres, libraries and a public NHS, need to be taken up by the unions.