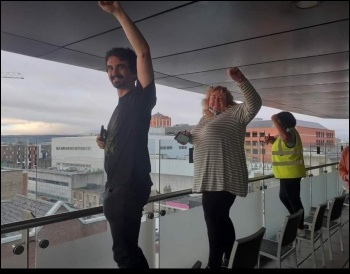 The occupation on 8 September marked 150 days of protests and campaigning by the workers, sacked when the company closed all its Irish stores, resulting in 1,000 job losses.

Disgracefully, some of the workers and supporters were arrested in Dublin before pressure forced their release.

Debenham's are also closing stores and laying off workers in the UK, and weekly protests by workers have been ongoing in Manchester, with solidarity actions elsewhere.