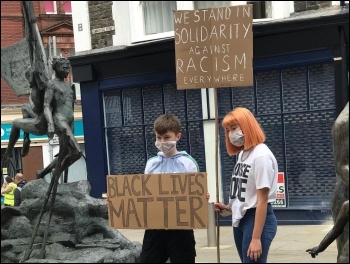 The first speaker was Socialist Party member Mariam Kamish. Andrew, one of the local BLM organisers, approached her and said: "I've seen you speak at all the demos. Would you like to speak today?" and he namechecked the Socialist Party during his speeches.

Cammilla Mngaza - mother of Syianda Mngaza, serving a four-year jail sentence for defending herself from a racist attack by five people - detailed an account of the attack and their horrific ordeal since Syianda's imprisonment. Cammilla's passion and determination were inspirational and infectious.

Several other young speakers all identified the capitalist system as the root cause of the institutional racism and systemic injustice they are protesting against. Many of the BLM organisers called for working-class unity.

The turnout was relatively small, 80 at the high point, but this had no negative effect on the mood, anger, and optimism. We ensured our Socialist Party placards were well distributed and prominent in the crowd, which was predominantly working-class black, white and Asian youth.

We stayed behind after the speeches to talk to attendees that wanted to know more about the Socialist Party and socialism.

There was another Black Lives Matter protest in Newcastle at Grey's Monument on 5 September. At least 100 people wanted to fight back against systemic racism.

We heard from many prominent anti-racist campaigners, and our own Socialist Party members got up to speak and advocate a socialist solution to the racist capitalist society.

Many of the attendees were young and looking for answers to a seemingly insurmountable problem. But our ideas are cutting through.

Many protesters are interested in socialism and demands that provide hope for the whole working class and the next generation.