Why I became and remain a socialist 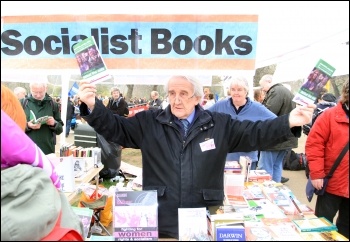 Keith Dickinson, 85, is still campaigning for socialism, and has been for over 60 years, photo Senan   (Click to enlarge)

Keith Dickinson, the Socialist Party's longest-standing member, recently celebrated his 85th birthday. Keith explains what inspired him to join the predecessor of the Socialist Party, and why he is still fighting for socialism in his ninth decade.

In the early 1950s, I joined a trade union. Although I didn't realise it, like a lot of youth today, I was thinking along socialist lines before that.

The voting age was 21 and I thought that was when I could do something about my ideas.

My Mum and Dad were card holding members of the Labour Party. When the party collector came for their subs every month, I signed up. That was 1957.

My parents had the Daily Herald, and on Sunday the Reynolds News, delivered through the door. These newspapers supported Labour. I read some of the articles.

I started attending Pirrie Ward Labour Party meetings. It turned out Pirrie Ward was the most left-wing in the Liverpool Walton constituency. With these enthusiastic workers, I immediately became involved in local election campaigns.

At the Christmas party, I was approached by one of the young members from another ward to attend the constituency youth section meetings. At these meetings I became convinced that there was an alternative way to organise society.

I had thought Labour was the only alternative, but discovered that when it had been in power nothing had fundamentally changed.

Labour introduced the NHS in 1948. It was a big factor in gaining my support, as it enabled me to get control of my, until then chronic, asthma.

But I began to understand that its reforms could quickly be eroded, by the Tories representing the interests of the capitalist class, and Labour leaders giving in to their pressure, as with introducing prescription charges for medicines.

The Labour ranks overwhelmingly opposed this, as they were almost totally working-class. You couldn't be a member unless you were a trade unionist.

I became convinced I was a socialist and a Marxist. In March 1958, I was invited to join Socialist Fight. It was the predecessor to Militant, now the Socialist Party.

The Liverpool branch met weekly and became a great education for me. I gained political confidence.

From Liverpool to west London

The weekly meetings, since I moved to west London, have been the most important. They are the essential way to counter the daily, hourly and minute-by-minute propaganda of the capitalist class - which no one can escape - by having that regular exchange of ideas, if only for two hours with my comrades.

Branch discussions enabled me to help in engineering apprentice and print worker strikes in my early days, and in many picket lines and protests since. They have convinced me of the ability of workers to run, not just their own workplaces, but society as a whole when they come together.

The Socialist Party tests our transitional programme - linking the fight for socialism with the day-to-day issues workers face - with people on the streets to prove its correctness or otherwise.

I've learnt by listening to speeches, making lots of notes and reading the history of working-class struggle: read history, Marxist theory, but I would also stress the importance of grasping an understanding of the economy.

Every new member comes to the Socialist Party and its ideas in different ways. There are no born or natural Marxists and Trotskyists. They have to be convinced in the process of trying to survive with their families.

I considered it a compliment to our ideas when I was expelled from the Labour Party after 27 years membership in 1983. This was the Labour leadership's only method of answering our ideas, after decades of their 'reformism' letting the working class down.

What could be more convincing than the Militant-led Liverpool 47 councillors in the 1980s? They applied a socialist programme - building 5,000 council houses, six children's nurseries, three sports centres with free use by the unemployed and youth, and created 10,000 jobs for these purposes.

This was more than all the other councils put together, Tory and Labour, at the same time.

At the end of the 1980s, Militant created the Anti-Poll Tax Federation. Nationwide we led 18 million in a non-payment campaign, which defeated the Poll Tax and brought down Thatcher.

I remain confident we will build a socialist society.

I'd lost hope, now I know there can be change and revolution 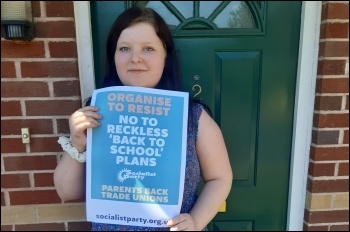 One of our youngest members - Bethany Morgan-Smith, a 14-year-old Leicester school student - says what inspired her to join the Socialist Party three years ago.

Watching a Channel 4 documentary about families struggling on £5 a day after fleeing abuse, made me cry. They wait a month for Universal Credit. The little girl cares for the mum, as she is struggling to cope.

This is capitalism. This is why I, and many others, fight for a better world, where families do not struggle to pay for things that the big bosses take for granted.

I fight for socialism, an equal society where the working class takes democratic control of production. One where we tax the rich, have free education, stop racism, stop homophobia etc.

I joined the Socialist Party in 2017 and it was one of the best decisions I have ever made. All I ever knew was austerity, cuts to my education and worrying about my future.

When my Mam joined the Socialist Party and I started going to demonstrations in London and Leicester, doing campaign stalls, and going to meetings, I knew there was an alternative. Change and revolution can happen!

I joined when my Mam was at Socialism 2017, I put in a join form into the Socialist Party website. I'm 14 now and the youth organiser for Leicester Socialist Party, and I am still fighting for a revolution.