Link to this page: https://www.socialistparty.org.uk/articles/31425 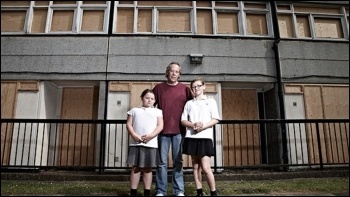 As a lifelong resident of Southwark, growing up in a council flat on the eleventh floor, and still living in a council property, you would think that the series on Channel Four, 'Council House Britain' would have been of interest to me.

I received an email from Southwark advertising the show and having a quick look at my local paper, I found an article by Councillor Kieran Williams, Southwark Council cabinet member for housing, saying that the council was committed to the documentary.

He said that publicly owned housing is the bedrock of a good society and hoped that the programme would "remind the whole country of the importance of everyone having a place to call home".

Before I settled down to watch, I thought at least it was not on Channel Five. That bastion of the reality show which highlights the life of those on benefits which reinforces the concept that the welfare system is a soft touch for those who are lazy and 'fiddling the system'.

As I watched the opening scenes the places that I grew up in and know well flashed before me in a panoramic view, the voiceover mentioning the Shard and the different types of areas and properties within the borough.

We started in Peckham. Here we found a housing officer doing her rounds. The first issues she faced was of a man using his fourth floor window to get into his home as his keys has been stolen. Their initial conversation was not very productive but it showed that this particular Southwark housing worker was basically concerned for her tenants.

As she walked around the estate she was responsible for, she spoke of how people saw those who lived on council estates. Growing up on a council estate her words were of those living on them being proud, just wanting a decent home. Her words resonated with me. I did wonder though if the images they showed as she spoke, might leave more of an impression on the viewers than her words.

Back in the office the housing officer talked of her workload, of how many tenants she had to deal with. Her frustration at being called about the repair of a toilet seat when she had so many other things to deal with. The council do not replace toilet seats. But they used to.

They used to do an awful lot more when they had an in-house repairs structure. I remember when estates had onsite caretakers. They would come and do all those little repairs that people were not able to do themselves. They would be known on the estate and would keep an eye on everything. This changed when in-house was moved to outside contracts. This changed when the caretaker role was ceased.

I couldn't help but think that this woman's workload would be a lot easier if caretakers were still around.

The programme continued. A woman with mental health issues who was on Universal Credit was being evicted due to rent arrears.

The voiceover explained that a high number of Universal Credit recipients fell into rent arrears due to the fact that, instead of being in receipt of housing benefit, they actually get all money paid into their account and it is their responsibility to pay the rent. A positive for me, as the documentary was using its voice to raise just one of the issues with Universal Credit.

However as mental health issues cause financial issues and financial issues cause mental health issues, my mind questioned why she was on Universal Credit and not PIP or ESA alongside housing benefit. Why her mental health condition was not being seen as a reason to intervene and make an arrangement to pay off arrears rather than be thrown out of her home. This was an indication that she had been let down, had not got the support she needed - and her and her daughter were suffering as a result.

Living with her working daughter, they went to the housing office to be told they would have to rent in the private sector. On a salary of £19,000 they were entitled to get £7 a week housing benefit. This, with rents in Southwark for a two bedroom flat rising from £1,200 per month, they were told that should "broaden their search" for a home. That is - move out of the borough, possibly move out of London. Eventually the daughter moved in with her boyfriend and the mother was rehoused. It seemed that splitting up the family, not having her daughter with her and forcing the daughter to make a life choice perhaps not solely out of desire but necessity, was the only answer to the problem they faced.

The pest control department with its cheeky characters were also shown. Going into an empty house with a severe cockroach infestation. Time for my feet to go up onto the sofa for me.

Allocation of housing was also shown with the joy of a young mum finally being able to move into a home large enough for her family and the rehousing of a Syrian refugee into a nice flat.

The flat that the refugee was rehoused in was actually the scene of a tragic event. A woman died in the flat, alone, surrounded by her hoarded belongings. The flat was cleared, under the monitoring of another housing officer who took great delight in his 'talking head' interview. While the flat was being cleared he talked of how much that flat would be worth on the open market, talked about the rent paid on it in disparaging, disbelieving tones.

I did a little more research about council housing in Southwark and there has been a policy of selling vacant council housing stock worth over £300,000 for a few years now. I wondered if he was thinking that instead of housing anyone on the very long waiting list, he was in there more in the guise of an estate agent as opposed to housing officer.

The caring Peckham officer was at another address. This of an elderly gentleman she was concerned about. Getting no response when at his door, during the moments when a locksmith was working on the key, she recollected about previously going into a flat where someone had died.

Thankfully the man was alive. As he opened the door the wallpaper in his hall showed the pattern of age and the dirt of many years. I recalled again the in-house council decorating teams of the past. Ensuring that the homes people lived in could be redecorated. Keeping the stock in good repair, as well as helping to provide clean and pleasant living environments for the people who lived in them.

We return to the man who was climbing in his window to get in to his house. We had the moment he was given new keys and the more pleasant and positive communications with his housing officer. A happy ending. A problem solved. A change of attitude from the tenant who now felt that he could turn to the council and get something done. The idea of the council and the tenants having a 'them and us' attitude however was reinforced when we had the snippets of other interviews as a taster of what was to come. They included complaining that the council was incompetent, to a mention of the "gentrification" of the borough.

Living in a council home should not be stigmatised but should be seen as a way forward. But the show left the impression that council housing is basically the residing place of misfits, the mentally ill, the hoarder, and those who were expecting too much from their council when they should all be bowing down in thanks for having a home at an affordable price.

There is a lot more I could say regarding Southwark Council. Too much to put into a review of a programme which it gave its "full support" to. However if the council wants people to understand the importance of social housing, then perhaps instead of relying on this programme to do the job they should instead look inwardly to the way they see those they are housing and how they want them portrayed, if this first programme is anything to go by.

Entertainment for some, reinforcing misguided beliefs for others and leaving those of us who live in council housing shaking their heads at the images portrayed.

I open my bedroom curtains every morning and the first thing I see is a tower block. Previously full of 144 council tenants it is now completely empty and has been so for many years. It is part of a redevelopment plan. Seen as in need of major refurbishment, the initial plan was to keep 74 as council flats the others sold on the open market and to build 60 new council homes - a loss of ten council homes.

This was the plan in 2012. It has not been accomplished. The block overlooks a large park and has wonderful views of London and the River Thames and is a few minutes' walk from a tube station. Far too good perhaps to just be council housing when a profit could be made by some? Southwark would disagree but that is the feeling of many people who are crying out for a home to call their own, homes for future generations, which they can afford and from which they can build a life feel. And I am one of them.