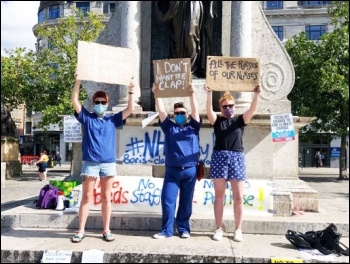 The Tory government's failed response to the Covid-19 pandemic means that the NHS is facing a major capacity crisis - that's before the pressure of the 'winter flu season' kicks in.

Nearly three million people have missed cancer screenings since March, and four million people are waiting for elective surgery - a figure that NHS chiefs expect to grow to a record ten million by the end of the year.

Ending staff shortages is the key to keeping the NHS afloat. The government in its election manifesto pledged an increase of 50,000 nurses by 2024-25. But this would only match the current shortfall. In addition, there are another 60,000 vacancies in the NHS.

Rather than just applauding NHS workers or giving out a few medals, the government should be engaged in a massive recruitment drive, linked to increased pay rates to overcome a decade of austerity.

Instead, Johnson and Co simply bung billions of pounds in undisclosed contracts to private companies to deal with the pandemic.

As usual, the Tories are putting profit before people. But healthworkers are fighting back and are being supported in their public demonstrations by fellow trade unionists, community campaigners and Socialist Party members.

Holly Johnson, a nursing sister in Sheffield, explains why she and her fellow healthworkers are taking action over pay.

"Years of Tory austerity, pay cuts and freezes have meant, in real terms, a 20% pay cut for many NHS workers. We are devalued as a profession, with job roles and responsibilities expanding and working conditions worsening. This is not to mention a brutal first wave of the pandemic, and we're about to face another - tired, stressed, and many of us suffering with long-term health problems related to contracting Covid.

"A fair pay rise would directly affect patient safety, actively halt the outsourcing to staffing agencies, and help bring the NHS back into public ownership and protect it.

"'NHS Workers Say NO!' is a grassroots-led movement, formed after we were overlooked in the public sector pay rises. It started as a Facebook group. We quickly organised action for our protests on 8 August, and have been building from there. There are over 84,000 members now and several local groups around the country.

"We are demanding a 15% pay rise for all NHS workers. I am the lead organiser for Sheffield and, with the help and support of Sheffield Save Our NHS and members of the Sheffield Socialist Party, there have been several actions. There is a national week of action from 12 to 16 October.

We will continue to build and organise in our workplaces and gain public support. We are not going away!"