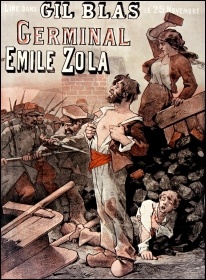 In 1987, a miner, face blackened from coal dust, who'd just finished his shift, walked past me, and waved a book, as grimy and black as his face. He called out to me: "Eric, have you read this book, 'Germinal'?" I scratched my head and said "No, who wrote it?" He replied "Emile Zola! Call yourself a bloody socialist." He laughed and walked off to the shower block. I went home, bought, and read and re-read Germinal.

Germinal covers a fictional, brutal strike wave across a coal mining district in France around 1860 - inspired by a strike that Zola experienced. The title, 'Germinal', is the month of spring in the calendar introduced during the French Revolution, and used again during the Paris Commune of 1871. Zola was in Paris during the crushing of the Paris Commune.

The story follows Étienne Lantier, who arrives in the village of Montsou looking for work, after losing his job in a railway workshop in Lille following a fight with his boss. Étienne is a self-educated man who struggles to cope with alcohol-fuelled, violent rages. By chance, he is offered a menial labouring job at the pit, where he learns how to cope with the terrible working conditions underground. Due to his industrial background, after a while, he is accepted by the miners.

He is offered a room by Rasseneur, an ex-miner who now runs a bar in the village. Rasseneur is a moderate socialist, opposed to the ideas of Étienne and his support for Marx's First International. The crisis developing in the economy leads to discussions between Rasseneur, Étienne and Souvarine the anarchist, on how best to improve the miners' conditions. Running through the book are the threads of the ideological differences between Marx and Bakunin which led to the split in the First International.

The strike breaks out with Étienne taking a leading role, but Rasseneur and Souvarine refuse to support the strike. Without spreading to the other pits in the area, the strike drifts. One striker says: "How can we make the strike general if we don't force all the blokes to come out with us?"

Maigrat, who owned the village store, lived next to the wealthy mine owners. He had been an inspector at the pit before opening a store, built for him by the mine owners, and he is able to undercut the other stores, driving them out of business. The miners depend on the store for supplies to live and needed credit during the strike. Maigrat gives the female miners' wives, and their daughters credit for supplies in return for sex.

Starvation devastates the community but the strikers stand firm until news spreads that the company is recruiting Belgian miners to scab. This is the final straw, and with the call for "bread, we need bread", the community unites against the bosses' attempt to break the strike. Thousands march on the pits to picket out the working miners and force the mines to close.

The women break away and march on the boss's grand house. Seeing Maigrat, they decide to take their revenge on the shopkeeper who tries to escape, but he falls and is killed. The women tear off his genitals and parade through the streets with them on the end of a stick.

The troops are called out to defend the scabs and open fire on the striking miners, breaking the strike. The miners are starved back to work, but in a final act of destruction, Souvarine, the anarchist, sabotages the shaft, flooding the pit.

Étienne, his confidence in the working class strengthened by his experiences, leaves the village after being offered a job in Paris as an organiser for the First International.

Germinal will touch your emotions, and Zola's last few words in the book will inspire you: "Men were springing forth, a black avenging army, germinating slowly in the furrows, growing towards the harvests of the next century, and their germination would soon overturn the earth."