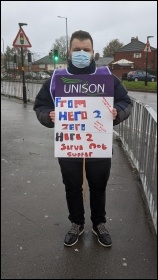 Showing how management do not need to dictate shifts, the workers' own rota kept the upbeat pickets well staffed from 6am until late across the two days. Many car, bus and ambulance drivers honked their support.

Heartlands is now part of the University Hospitals Birmingham (UHB) NHS Trust, which is chaired by Blairite ex-Home Secretary Jacqui Smith, who has prioritised appearing on Strictly Come Dancing. But the low-paid porters are refusing to dance to her tune.

Currently, the Heartlands porters work on a fixed shift system - same times and days each week - but UHB bosses are taking a one-size-fits-all approach in trying to plough through rota changes, so they match those already made at the trust's Queen Elizabeth hospital. But what right do the bosses have to rip up longstanding agreements and make changes with no regard for the health and safety of the porters?

Night-shift porters would now have to do more day shifts, resulting in big pay cuts. The porters could also be asked to work at any of the trusts' four hospitals. The changes would mess up childcare arrangements too. One picket pointed out that the proposed rota would result in him not being able to see his young child for over a week. Another worker said how the bosses' 'consultation' on the changes had been just a familiar box ticking effort.

UHB bosses sent Queen Elizabeth porters to Heartlands to try and limit the effect of the strike, but with limited success as they did not know the layout or systems in place. UHB also emailed the trust's auxiliary healthcare assistants asking if anyone was available for shifts "to assist with patient transfers".

Workers should have a say in how their shifts are allocated, so detrimental changes cannot be enforced. The NHS needs adequate funding so there is enough staff to sufficiently cover days and nights. Porters recognise there are problems within the NHS, however they are not due to the staff or current shift patterns, but to lack of investment and mismanagement. Many porters have problems with their passes as they don't allow access for all the areas they need in order to do their job!

Further negotiations with the porters' union Unison are set to follow the strike, with another walkout likely if management still refuses to back down. Unison needs to send reps to the other three UHB hospitals - Queen Elizabeth, Good Hope and Solihull - to call for all hospital workers not to undermine the official dispute. In addition, the union should arrange meetings with other health unions, particularly Unite, to build support for the action.