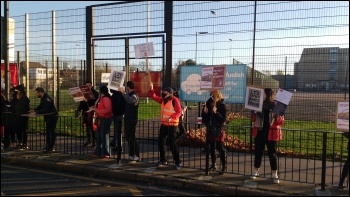 "I am the least rebellious person I know. I get to school at 6.30! But I have participated in this strike, and I will continue to participate in this strike... The kids will miss out on a whole lot more if we fall."

Another striker told the third-day rally: "I come from a working-class background. I wanted to give working-class people a chance. That's why I went into education. That's not what's happening with this expansion."

Even most of the school's senior management team is on strike against this disastrous plan. After more than four hours of negotiations, the education authority's response to the union's demand for 13 new jobs was... 2.2 jobs. Newham NEU rightly says the strike will go on till there's a real offer. The union has called further strike days for Tuesday 8 and Wednesday 9 December.

Newham council has over £500 million in 'usable' reserves and well over £1 billion in total reserves. The Labour administration has had six years' warning of the need for more places. It should use its reserves and borrowing powers to create safe, manageable school places in the borough - under the democratic oversight of school unions, parents and students - and send the bill to Westminster.

The NEU's national leadership has declared the strike will go on till there is an acceptable alternative. This is an important signal to the council that it is facing firm opposition.