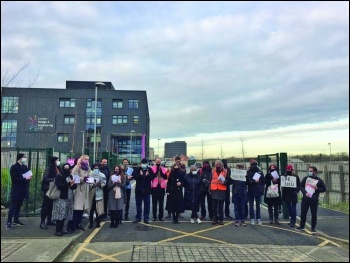 Teachers at the London Design and Engineering College (LDE UTC) in Newham are on their third day of strike action against the summary dismissal of an NEU rep, Sharon.

LDE UTC is a free school where the head thinks he can do as he pleases. Its building is squashed into a corner of the University of East London.

It is far too small for the number of pupils and has no playground. When the NEU rightly raised health and safety concerns during the pandemic, the head responded by sacking the rep and saying she had no rights because she had been employed for less than two years.

Now teachers are determined to show the head he can't get away with this bullying behaviour.

A judge found in favour of Sharon and told LDE management to reinstate her. Management said it would comply, but has reneged.

Sharon explained: "I wasn't told there was an investigation, I wasn't asked any questions, I was just sent a 'dismissal pack' by courier to my house.

"I was dismissed for trade union activity; I had become a workplace rep in July, and had asked questions about Covid-19 and general health and safety.

"They don't want to acknowledge the NEU at the college, and they just planned to get rid of me. I arrived back in September to find they'd recruited another member of staff to replace me.

"Today we've got teachers out on the picket. An attack on one is an attack on all. I ask readers of the Socialist to show solidarity with our strike."

Another striker added: "This school has no regard for workers' rights. Victimisation and intimidation seem to be built into our contracts. That is why we're very pleased with the turnout today."

A rally in support of the strikers was held with speakers including Niall Mulholland from Newham Trades Council, and Ferdy Lyons from East London Socialist Party.