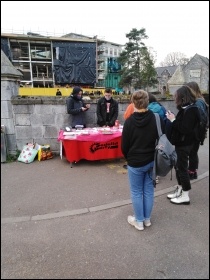 Young members from Devon Socialist Party ran a Friday lunch-time campaign stall outside Exeter College. We got lots of interest, ran out of leaflets and youth charters, and met two people interested in joining. We also got the support of a worker on the nearby construction site.

When the Socialist Party was campaigning in Waltham Cross in Hertfordshire - for a 15% pay rise for the NHS and to reject the public sector pay freeze - we heard somebody turn to their friend and say: "It seems there are a lot of socialists around here these days."