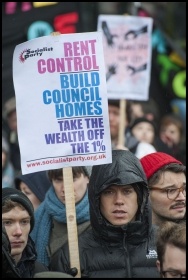 At the start of November, students at the University of Oxford launched a rent strike campaign amid growing anger towards the blatant lies, landlordism, and overall indifference shown by university management throughout this coronavirus pandemic.

The 'Oxford, Cut the Rent!' campaign mirrors demands made by student-led rent strikes elsewhere in the UK, calling for a 30% reduction in rent for this academic year, the waiving of penalties, immediate cancellation of contracts for all students wishing to move out of university accommodation, and increased medical and mental health support for students.

The Oxford campaign is organised by a democratic committee comprising members of various left student groups, including Socialist Students, and currently has student representatives from across more than half the university's constituent colleges.

The success of the Manchester University rent strike last month in securing a four-week rent cut has inspired students across the country, and similar campaigns are now underway in at least twenty UK universities - the largest university rent strike action seen in over forty years. Socialist Students supports all current and future rent strike campaigns, and absolutely encourages any gains that can be made via the collective action of young people.

However, as socialists we argue for a programme that goes beyond the short-termism of a one-time rent reduction, to ultimately call for a fully publicly funded higher education system, operated under the democratic control of staff and students. As part of that, we argue for students to receive a genuine living grant, with rent capped at 25% of this.

We know that the wealth exists in society to support this kind of education system; but this wealth must first be taken off the 1% and re-allocated under democratic workers' oversight in order to guarantee the educational needs of all.

Socialist Students argues that we must look beyond the coronavirus, to the faults of British capitalism and years of marketisation within higher education, to identify the root cause of all the issues raised within rent strike campaigns this year.

These campaigns rightly highlight the mental health crisis, extortionate tuition fees, and disproportionately high accommodation costs that have faced students this term. However, these problems predate the pandemic and are the natural result of a higher education system in which universities secure private funding by exploiting staff and students while cutting jobs and services.

While joining the fight for rent cuts as part of a growing national movement, Socialist Students offers a long-term programme for a completely different kind of higher education system. A publicly funded, socialist higher education system controlled by staff and students, and not the overpaid vice-chancellors and university executives who have continued to look after the bank balance, sacrificing our wellbeing this term.

Oxford Socialist Party: The election result and what comes next