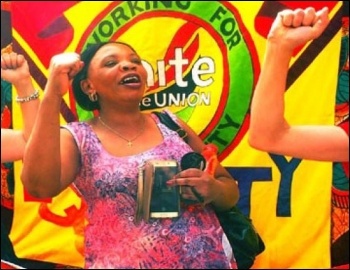 Unite the union is running a consultative ballot on 16-17 December to launch the campaign to get Judith Katera reinstated. Judith, a longstanding union rep and activist in Battersea garage in South London, has been dismissed by Abellio. She feels that both herself and Moe Muhsin Manir, the rep at Walworth garage in the same company, are being targeted by the company because of their union activities.

It is vital that there be the biggest 'yes' vote possible, to send the message to Abellio that bus drivers in Battersea will fight for Judith's job and stop attacks on the union. We hope that such a vote will force management to reinstate Judith. But if they still refuse, the union would then be able to launch a full industrial action ballot.