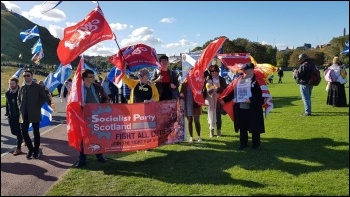 90 socialists from Scotland, Wales, England and Ireland, and even from as far afield as the US, attended an online book launch public meeting organised by Socialist Party Scotland on 10 December.

The new book, 'Scotland and the national question - a Marxist approach', is a 150-page contribution to a vital debate that is taking place in Scotland: how, and using what methods, can an independent socialist Scotland be achieved?

Philip Stott, national secretary of Socialist Party Scotland, pointed out that there were two main reasons for producing the book now. Firstly, to look at how our programme on the national question has evolved over the decades. Unlike the vast majority of forces on the left in Scotland, Militant and Socialist Party Scotland can reproduce our material on this issue and stand by it. We have always taken a very sensitive approach to the right of the Scottish people to self-determination.

Philip pointed out that another key reason for producing the book now was the major confrontation that is looming between a Tory government at Westminster, who will at all costs refuse a second independence referendum, and the majority of the working class in Scotland who now support independence. The Scottish elections in May 2021 will very likely see a pro-independence majority government at Holyrood.

The scene is therefore set for a massive collision on the issue. Even now, 79% of 16-24 year-olds support independence for Scotland. A key task of this book, Philip argued, is to make the case for a mass working-class-led movement for IndyRef2, with the trade unions taking a decisive lead. The workers' movement and socialists must fight for the leadership of the movement for self-determination and link this to the struggle for an independent socialist Scotland.

Peter Taaffe, political secretary of the Socialist Party England and Wales, explained that the national question is in many cases one of the unresolved tasks of capitalism. Even at the height of its powers, capitalism failed in a number of bourgeois national revolutions to complete the task of creating settled nation states. As a result, in this period of capitalist crisis, the national question has remerged with a vengeance in many countries. It is the task of socialists to be powerful advocates for democratic rights, linked to the struggle for socialism and the creation of a voluntary socialist federation of states.

Dave Reid from Wales explained that the movement for Scottish independence is having a big effect in Wales. Support for independence is increasing - as high as 25% in some polls this year. 40% of young people support independence. Socialist Party Wales calls for a parliament in Wales with a socialist majority and full economic and tax-raising powers.

The new book on the national question can play a key role in arming workers and young people with the programme and methods needed to win the struggle for national self-determination and socialism.

Scotland and the national question - a Marxist approach

South west London Socialist Party: The role of a Marxist in the workplace