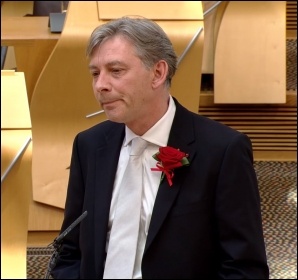 The announcement of Leonard's resignation came the day after a meeting between multi-millionaire businessman and former Labour donor Lord Haughey, as well as Robert Latham, the lawyer who gave £100,000 to Keir Starmer's leadership campaign. Haughey, it was reported, had demanded Leonard be removed before he would donate to Labour again.

The opportunity to create a genuine anti-austerity workers' party was squandered by the leadership of the Corbyn movement, who sought compromise with the Blairites at every turn.

Under Leonard's leadership, Labour councils still carried out cuts. The policy of opposing the right to a second referendum on Scottish independence was maintained, further undermining Labour's already dwindling support in Scotland among the working class. At the December 2019 general election, Labour in Scotland was yet again reduced to a single MP.

As we warned in November 2017 after Leonard's victory: "The right wingers in the Labour Party are ruthless. They will do everything in their power to defeat the left and remove Corbyn and, for that matter, Leonard over time. In this they have the full backing of the capitalist establishment."

With the millionaire tendency back in the driving seat of Scottish Labour, the trade union movement, with more than 500,000 members in Scotland, should call a conference to discuss building real working-class political representation through a new workers' party.

As a step toward this, the Scottish Trade Unionist and Socialist Coalition (TUSC) is standing candidates in the May Scottish parliament elections. Our candidates will be standing on a fighting socialist manifesto committed to public ownership, trade union rights, an emergency programme for job creation, a mass campaign for 'indyref2' and a new party for the working class in Scotland.