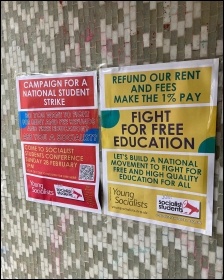 On Wednesday 17 February, Socialist Students organised a postering campaign through Selly Oak in Birmingham to advertise our upcoming online conference. This neighbourhood, mostly populated by students, has seen closure of its pubs and leisure centres during the coronavirus pandemic. But students still populate the streets and we are angry and frustrated.

Students have been forced to pay tuition fees and astronomical rents while being unable to attend their lectures. University managers have used every move in their playbook to minimise their costs and increase their income, no matter the consequences.

An air of discontent is present among students, and in Selly Oak it is no exception. Our posters call upon these disaffected students to participate in the forthcoming Socialist Students conference, and join with us in fighting tuition fees, abusive landlords and penny-pinching university managements as a first step towards a socialist transformation of society.

A number of students have already been in contact after seeing our posters and have registered to attend the conference. The days of complacency are over. Students want to organise and we want to fight back!