No let up as sparks continue protests against deskilling 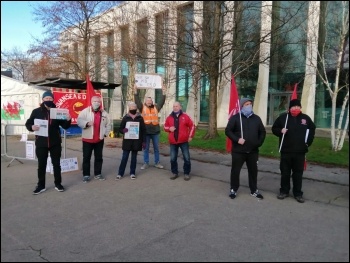 Swansea Trades Council and Swansea Socialist Party members again joined the protest in solidarity. This was much appreciated by the Unite members.

Our leaflets were snapped up and workers in other trades expressed concern that if deskilling of sparks was successful then they could be next in line.

Younger workers, unsure at first about how to respond, were largely supportive after discussing with the Unite full-time officer and the other protesters.

This action by the sparks has definitely been a topic of discussion on the site because the few who refused a leaflet said they already had one from the last time we leafleted and had been talking about it with the other lads on site.

During the quiet periods, some of the sparks from Cardiff engaged in some friendly banter with the Swansea members, but ultimately agreed that whoever won the Swans v Bluebirds derby we would all be winners if we defeat these employers attack on our terms and conditions.

The sparks took the fight against deskilling to the upmarket streets of Covent Garden and the Royal Opera House. The job is run by NG Bailey, one of the main companies behind the Electrical Service Operator (ESO) grade that threatens to have 70% of electricians' work done by unskilled and cheaper labour to boost the bosses' profits.

This was one of four protests organised in a campaign that is building, and there are signs that the bosses are being pushed back.

Unite EC member Frank Morris told protesting electricians that EDF at Hinkley Point is moving, but the likes of NG Baileys and Balfours haven't withdrawn the threat of ESO, so the fight has to continue.

Frank told Reel News: "Twenty five years ago, Balfour Beatty rewired the Opera House and then blacklisted its entire workforce, and 25 years later they're still at it." As one of the sparks said: "If we show solidarity and unity, we've got these companies on the run."

There was a determined mood at the 20-strong Scottish Unite rank-and-file protest outside the offices of NG Bailey at Strathclyde Park. Growing anger at the cost-cutting and deskilling practices of Bailey and Balfour construction companies was evident.

There was strong support for the calling of national industrial action to deal with the profiteering bosses, on wages, terms and conditions, and the race to the bottom. The next steps in turning the weekly protests into a national campaign, including industrial action, are vital.