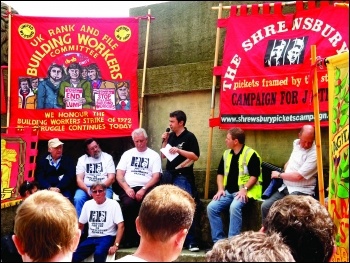 On 23 March, the Court of Appeal exonerated my clients Ricky Tomlinson, Arthur Murray and the 'Shrewsbury 24.' They were trade unionists arrested for their involvement in the 1972 national builders' strike.

In 1973, Ricky Tomlinson and Des Warren were sentenced to prison for 'unlawful assembly, conspiracy to intimidate and affray' - a historic miscarriage of justice that has now been righted nearly 50 years after the events.

The second related to the prejudicial screening of 'The Red Under the Bed', a TV programme highly critical of trade union organising.

The documentary featured footage of Ricky Tomlinson and also Des Warren in its opening minutes. The programme's narrative concretely, but wrongly, linked our clients with disruption and violence. How did it achieve this?

A feature of the programme was to use News of the World journalist Simon Regan as an 'eyewitness' to the violence during the building strike.

They concluded that Regan was "never present" at the Corby site he referred to or "...if present completely fabricated the incidents referred to and was either mistaken in the location of the [Birmingham] incident or suffered at the time a figment of imagination."

Crucially, the Northampton and County Constabulary Report into Simon Regan's allegations, was dated 16 November 1972. Thus, by that date, the Director of Public Prosecutions and the Attorney General's Office (the legal branch of government) were aware that the allegations of the journalist Simon Regan were "completely fabricated" and "a figment of imagination".

Tory prime minister Ted Heath signed off the programme in a ministerial document - saying " we want more of this kind of thing."

Even today, the state has yet to release all the papers surrounding the national builders strike and the Shrewsbury pickets' case. What have they got to hide? On behalf of Ricky and Arthur we will be demanding their release.

At the close of the trial in 1973, Des Warren addressed the court. Facing a prison sentence, he exposed the fact that it was a political trial, going on to say: "Was there a conspiracy? Yes, there was, but not by the pickets... the conspiracy was one between the Home Secretary, the employers and the police." True then - and even more true today.