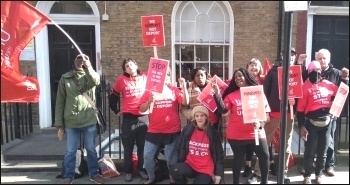 Maintenance workers in the troubled homelessness charity St Mungo's have voted for indefinite strike action. The strike concerns a failure to investigate management bullying and harassment of union reps - nearly half of Unite reps in the organisation are engaged in formal processes regarding their own employment.

The Orwellian response has been to suspend a rep who raised a grievance concerning management bullying. It seems this has been distressing for senior managers! If this move was intended to intimidate it has failed and the mood has hardened across the organisation.

The belligerent approach of management raises the need for wider strike action in the organisation.

In a recent Unite survey, 68% of respondents reported that they have experienced bullying from St Mungo's management.

One worker says: "Reps, especially health and safety reps who have been supporting members in this pandemic, have been targeted during this restructuring process within St Mungo's and now face redundancy."

Members of the Unite housing workers branch (LE1111) are committed to supporting St Mungo's workers all the way.

Concerns about St Mungo's senior management have been raised over several years; care organisations in which staff are punished for speaking up have a record of poor treatment of vulnerable clients.

Unite believes that many of St Mungo's services are currently excellent. This is because of the commitment of frontline workers and managers.

However, the approach of the senior leadership of the organisation has been cause for deep concern in recent years and will tend to erode services over time unless corrected.

Unless management changes its position, strike action will begin from Thursday 22 April.